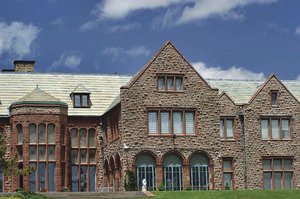 Rough Point, built in a baronial style from quarried stone, was the Dukes’ home in Newport. Doris Duke’s Restoration Foundation will celebrate its golden anniversary with many special activities.

Newport is fortunate to have buildings that feature some of the best work by many notable architects. As a thriving colonial seaport, as a Gilded Age resort, and finally as a destination for the wealthy, Newport has seen successive waves of financial support and energy flow in to preserve and restore the wonderful historic structures that make up the fabric of the city.

The Doris Duke Preservation Awards were established 12 years ago under the auspices of the Newport Restoration Foundation (NRF), in coordination with the city, to review, evaluate and honor those individuals and projects in the community who best represent the preservation movement.

Duke, a summer resident of Newport and once the wealthiest woman in America, set about saving Newport’s colonial structures from neglect and demolition during the 1960s. Of the 80 houses she saved, 71 are still owned and operated by the foundation to help ensure that her vision of colonial architectural structures is preserved and maintained.

The 2018 award gala was held at Rough Point on Sept. 7. Three works of design and one person received awards from among the many nominations that were received and reviewed by the jury.

Perhaps the most visible and familiar of this year’s winners is 26-30 Washington Square, which is the new home to the Stoneacre Brasserie. GA Washington Square, LLC, will be recognized for its efforts to restore and reinvigorate the two-story Colonial Revival brick masonry structure, which was originally built in 1931.

The renovation project, which was completed in 2017, restored the exterior above the storefront, replaced windows, cleaned and repointed masonry, and replicated the missing gable ornament. The interior space, which was formerly Yesterday’s restaurant, was completely renovated and updated.

The second honored project is the spectacular restoration of the famous Blue Garden, designed for Arthur Curtiss and Harriet Parsons James by Frederick Law Olmsted Jr. The award is being given posthumously to Dorrance “Dodo” Hill Hamilton for rebuilding an original historic landscape design to fit modern standards. After the James’ died in 1941, the original gardens fell into disrepair and the property was subdivided and purchased by developers.

In 2012, the property at 70 Beacon Hill Road was purchased by Hamilton, a noted garden enthusiast and philanthropist, and the recreation process began. Landscape architects used original dimensioned drawings to specify the rebuilding of garden structures to modern code, and Olmsted’s plans were reinterpreted to keep the original intent but provide for more sustainable future management.

The last of the three projects to be honored will be The Cattle Crib on Beacon Hill Road, which is owned by Mark and Leslie Hull, who will be recognized for the adaptive reuse of an early 20th-century livestock pen, which had fallen into neglect. The structure was originally part of Swiss Village, previously known as Surprise Valley Farm, and was associated with the Arthur Curtiss James estate.

The building was abandoned many decades ago and was left to deteriorate to a dilapidated state. It has been renovated in an effort to bring back its original character, and is currently enjoyed by the property owners as a retreat.

A special award is being given to local designer John Peixinho, who was the chairman of the Historic District Commission for many years and was deeply involved in the early conception of the Doris Duke Preservation Awards back in 2006.

This year also celebrates the 50th anniversary of the founding of the Newport Restoration Foundation by Duke and is the first year that it is being led by its new executive director, Mark Thompson, who took over the leadership of the organization from Pieter Roos.

The awards will be held on the grounds of Rough Point, which was originally designed in 1891 by Peabody and Sterns for the Frederick Vanderbilt family, but was extensively renovated by Horace Trumbauer for the Duke family in 1922-23. The building, built in a baronial style from quarried stone, was Duke’s home in Newport and has been preserved much as when she lived in it, right down to the Architectural Digest magazines stacked neatly on the upper stairway foyer table.

Two galleries represent the one change to the house since it was bequeathed to the NRF. The shows, “Designing for Doris: David Webb Jewelry and Newport’s Architectural Gems” and “To Preserve and Restore: Newport Restoration Foundation at 50” will be available to visit the evening of the awards and through the end of the house’s season on Nov. 11.