A History of Newport Architecture in Four Parts: The Gilded Age 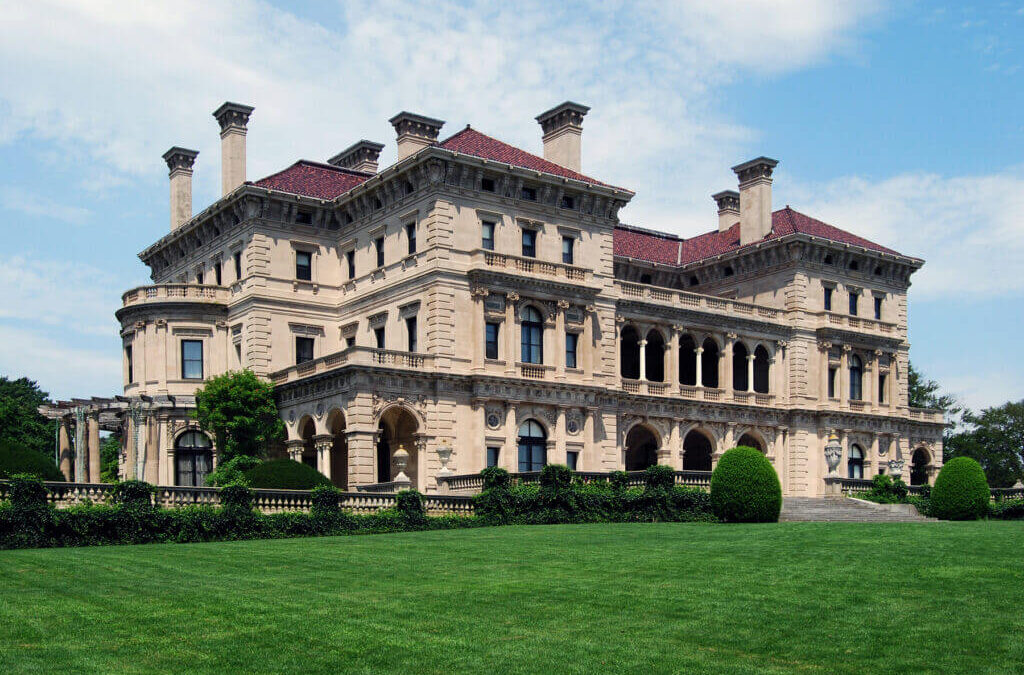 While many of the architectural eras that are represented in Newport also occurred many other places, one era in which Newport stands pre-eminent is in the concentration of grand homes from the Gilded Age. The term was coined by Mark Twain to derisively describe an era of luxury and opulence for a very small segment of the American population. That elite group summered in Newport during this golden age of architecture and built an extraordinary number of spectacular mansions in which to entertain and socialize with one another. This was perhaps begun by the Astor’s purchase of Beechwood along the famed Bellevue Avenue that was being developed during this era. Mrs. Astor was the originator of the term “The 400” as that is the number of individuals who could fit in her New York ballroom and therefore people in the city knew whether they were in or out of this elite based on whether they received an invitation to the annual Christmas Party or not. The Newport residence also had a much smaller ballroom.

The Astors were quickly followed to Newport by many members of New York and Boston society, most notably by the Vanderbilt clan. Of the seven children of Commodore Vanderbilt, founder of the New York Central Railroad, six of them built mansions in Newport for the summer season. Two of these houses, Marble House and The Breakers, are among the collection of eight buildings owned and operated by the Preservation society. These “Summer Cottages,” as they were quaintly called, were enormous houses ornamented to the level of palaces owned by European royalty. The Breakers, designed by the Vanderbilt family architect Richard Morris Hunt, is more than 120,000 square feet in size and required a staff of more than 50 to operate it during the two months that it was used each summer. The Shingle Style of the early period of the Gilded Age quickly transitioned to a Neo-Classical and Renaissance Revival Architecture of grand architecture that really exists very few places in America other than Newport. Recently many of these mansions that had been made into condominiums or other institutions are being restored into single family residences by a new wave of historically minded entrepreneurs and billionaires.

Previous historical periods (Colonial settlement and the Federalist and Early Victorian Era) were posted in the previous weeks.

Following historical period (the Modern Era) will be posted in the upcoming week to conclude the blog series.