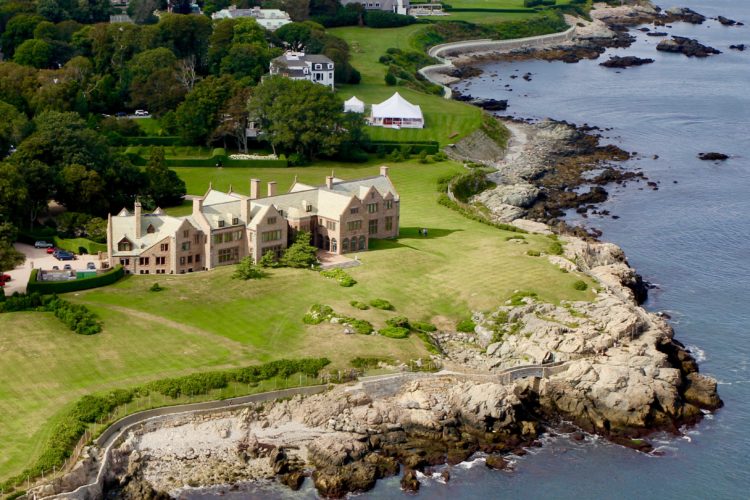 Newport is filled with great buildings that have been modified over time, either by other great architects or which were replaced by buildings that today the Historic District Commission would no longer allow to be replaced. This means we might have had the old structures but could have been missing masterpieces like the (new) Breakers, The Waves, and dozens, if not hundreds, of other structures which would not exist.

One such building that has been significantly re-crafted over time is Rough Point, located at 680 Bellevue Avenue. Begun in 1887 and completed in 1892, it was originally designed in the English Manorial Style by the noted Boston architectural firm Peabody & Stearns. Named for a magnificent outcropping of rock jutting out into the Atlantic Ocean near the end of famed Bellevue Avenue, this red sandstone property was built for Fredrick William Vanderbilt and his family to enjoy in the summer months by the ocean. The family later rented the home to “Tinplate King” William Batemen Leeds in 1906. After he died in 1908, his widow, Nancy Leeds, employed famous architect John Russell Pope to make some exterior alterations to the home. 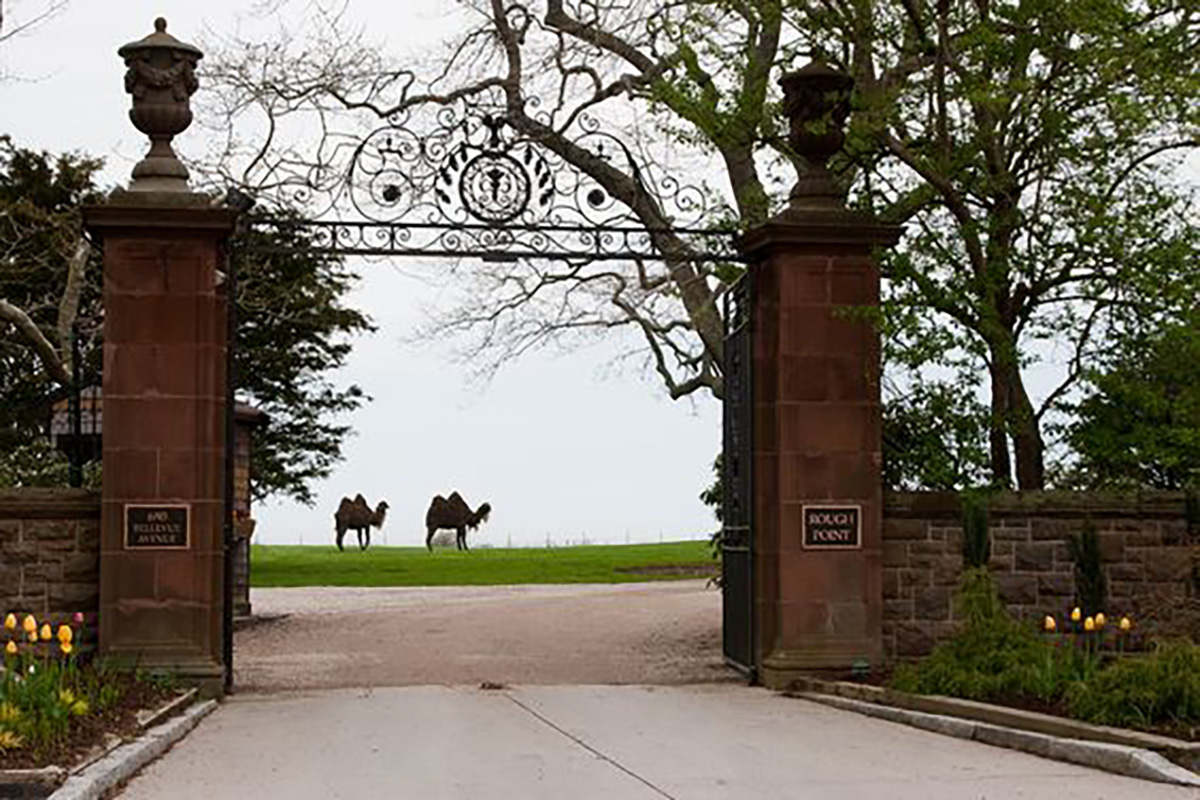 The Leeds occupied the house until their son married Princess Xenia Georgievna of Russia. Rough Point was then sold to James Buchanan Duke, a tobacco powerhouse, in 1922 and underwent serious renovations at the hands of Philadelphia architect Horace Trumbauer. Two additional wings were added to the already giant home, expanding it to 105 rooms in total. Like any good renovation, Trumbauer neatly fit the new design to be compatible and complimentary to the original structure so that the completed building held together as a unified structure.

Eventually the home was inherited by the beautiful (but eccentric) Doris Duke, who was famous for being perhaps the wealthiest woman in the world in the 1950s and who set a style and lived by her own rules. Doris Duke loved Newport, particularly in the summer, and was central in founding and financing the Newport Restoration Foundation (NRF). This organization has purchased, renovated, and still continues to own and rent dozens of the Colonial Era structures in Newport’s Point neighborhood. Miss Duke, as she was commonly known about town, reportedly said to her good friend and fellow socialite Katherine Warren (one of the primary founders of the Preservation Society of Newport County), something to the effect of, “You take care of the Gilded Age, and I will take care of the Colonial,” and each did as they promised.

The NRF also owns and operates Rough Point and the Whitehorne House as museums, which house parts of Doris Duke’s extraordinary furniture collections. Visiting Rough Point is like stepping back in time, as the house is maintained just as it was when Duke died in 1993, right down to the neatly stacked piles of Architectural Digests lying like sentinels for a lost mistress on a stair landing table. As she passed without children or heirs, the house and its contents became part of the NRF’s holdings and legacy. Elsewhere, her legacy is administered by the Doris Duke Charitable Foundation, and is dedicated to the performing arts, medical research, and the prevention of cruelty to children and animals, wildlife, and ecology.

Rough Point was home to the eccentric lifestyles of some of America’s wealthiest families including the Vanderbilts, the Leeds, and the Dukes. Events which occurred on the property included the upbringing of two camels named Princess and Baby, which were gifts to the Dukes from a Saudi arms dealer. Tribute is still paid to the beloved family pets through camel-shaped hedges among the glorious gardens. Besides the home’s extravagant interior, the grounds around the house are of equal beauty and care. Ms. Duke had a passion for gardening and enjoyed her homegrown vegetables. 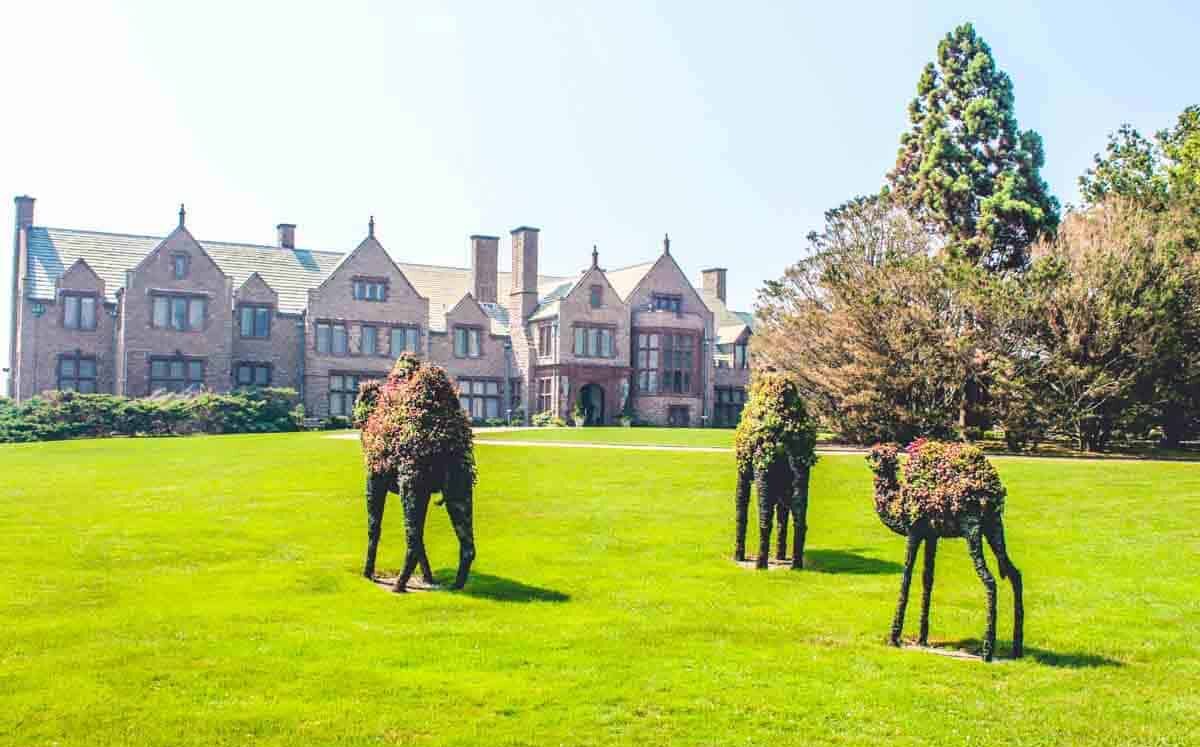 The house has finally re-opened for visitation after the long COVID pandemic. This is a wonderful destination to see and enjoy the art, architecture, and furniture of many eras collected by the singular eye and taste of Doris Duke. Visitors are delighted to see the lavish lifestyle of the summer socialites and view their personal style and belongings which remain in the home.

What is especially noteworthy is how the house was built and allowed to evolve over time, taking on the character of each inhabitant while also maintaining a certain architectural consistency and integrity over time. As Winston Churchill eloquently stated, “First we shape our buildings; thereafter they shape us.” This is how it should be, with neither stagnant nor static, rooted in the past, and yet still evolving together toward the future.