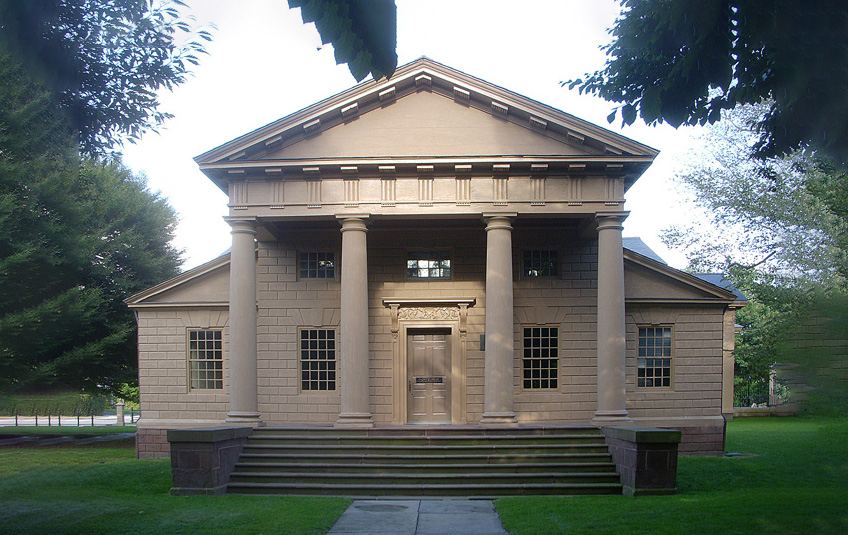 Among the many firsts that Newport, Rhode Island is famous for and proud of is the Redwood Library, the oldest continuously operating purpose-built library in America. Through it’s construction and expansion over time, the building has been an icon of both the history of Newport architecture but also the evolution of architectural design and practice from the Colonial era through to the present day. The original columnated Roman temple part of the building was designed by Peter Harrison and built it in 1747. This section of the building was closely modeled upon a design drawn in the I Quattro Libri dell’Architettura written and illustrated by seventh century, Italian architect Andrea Palladio (1508-1580). 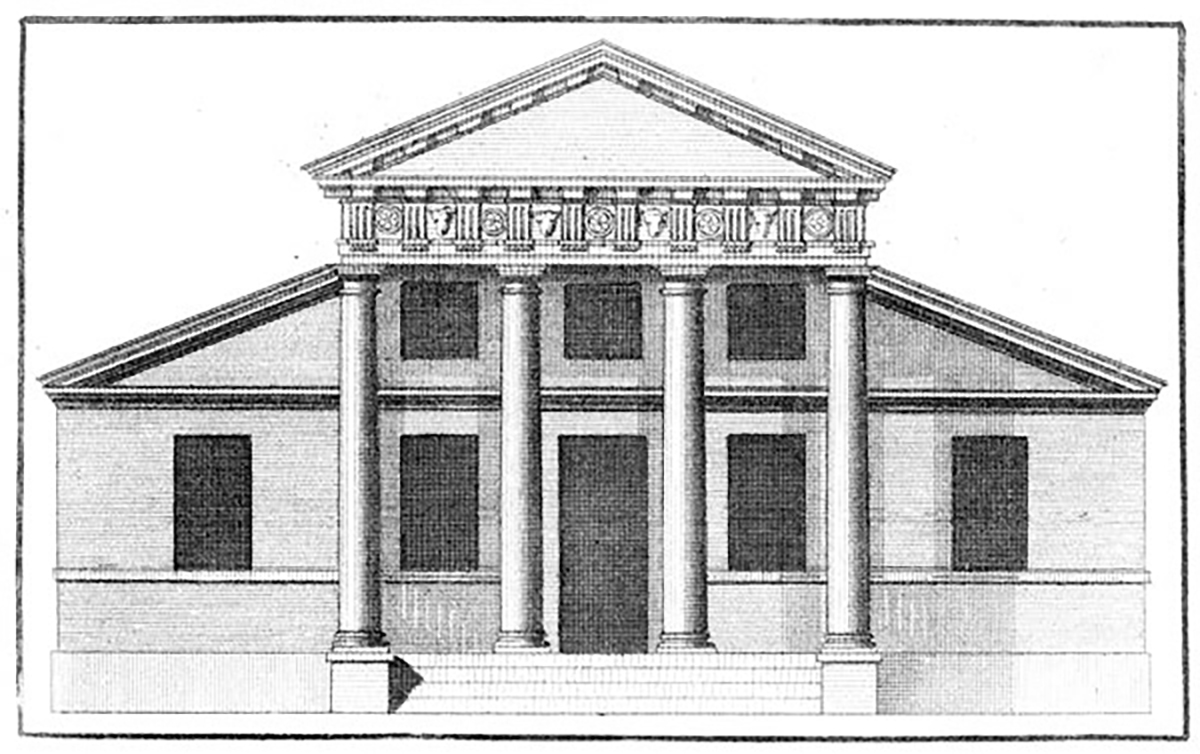 These books in turn were the illustrations of De Architectura, the unknown illustrated writings of Roman architect and engineer Marcus Vitruvius Pollio (c. 80BC – 15BC). They had been uncovered in the library of Saint Gall Abbey, now in Switzerland, in 1414 by the Florentine humanist Poggio Bracciolini. This book is the only description of the means and methods of classical design that survived until the Renaissance and therefore was seen as a precious intellectual gift from the long departed creators of ancient Rome and Athens. That the Redwood Library was among the first classically inspired buildings in America based upon a book inspired by another ancient book discovered in another library is fitting. The original structure was compact, sitting atop a hill in Colonial Newport above the settled areas of the Point and Historic Hill (as they are known today), much like the way the Acropolis sits above Athens. The main hall of the five original rooms was lit from above by a small skylight to bring natural light into the space. The wall is surrounded by shelves where the precious collection of FSI volumes were kept. 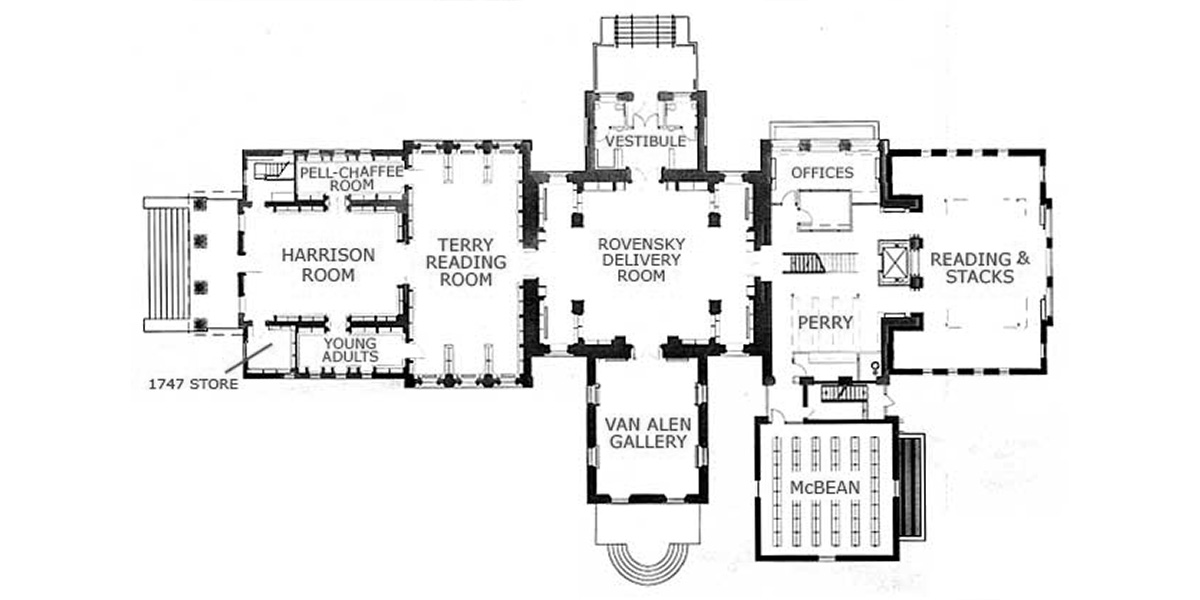 At the time of the library’s founding, books were precious items that had to be printed page by page on a handset press, and illustrated by woodcuts. During the time from 1776 to 1779, while the British occupied Newport, the Redwood Library served as an officer’s club and many of the original books went missing but the library is always on the lookout for copies of books from the original list in an effort to fully restore the original collection. As was appropriate to that time in Newport‘s history, the library was founded by wealthy merchants of many different faiths and is named for Abraham Redwood (1709-1788), who was a Quaker merchant with operations in Newport. The organization was founded and continues to be supported as a membership organization. Its original membership of 46 shareholders, including Anglicans, Jews, Quakers, and other faiths. In 1875, an addition was added to the original structure by Newport born architect, Renaissance man and Redwood Library member George Champlin Mason Sr. Although the majority of his architectural design was in the Second Empire, Italianate, or Queen Anne Revival styles, Mason added a reading room to the structure in a very appropriate classical style that closely emulated the original building. This addition was necessitated by the growth of Newport in the period after the completion of the American Civil War in 1865. With peace came a rapid industrialization and an expansion of wealth in America that would later be coined “The Gilded Age“. 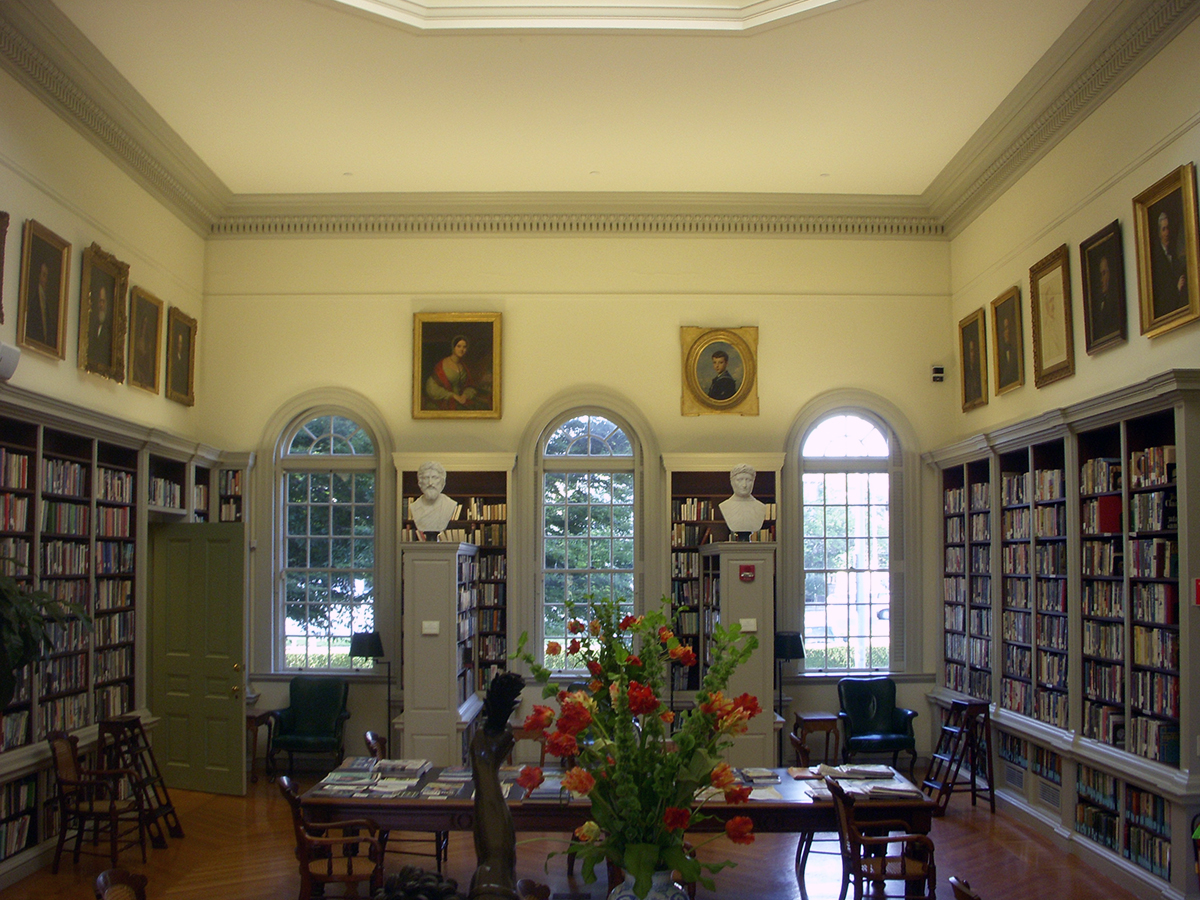 Although the exterior of this addition is similarly detailed to the original structure by Peter Harrison, the room is made with a much larger skylight which was possible with advances in glass technology made by 1875. During the era after the Civil War, there was a tremendous increase in building and very particularly in the Catherine Kay neighborhood where the Redwood Library is situated. In just 20 years from 1860 to 1880, this part of Newport went from a sparsely populated area to a neighborhood with numerous large Victorian houses, many designed by George Champlin Mason and Son. Upon the purchase of the Beechwood Mansion by Mr. and Mrs. William Backhouse Astor in 1880, Newport went from being a summer resort to being THE summer resort that anyone who had aspirations of social attainment had to spend time. Caroline Schermerhorn Astor was the leading light of New York society during that period and where she went others quickly followed. The amount of construction and number of houses that would be built in the period from 1880 to 1925 is truly extraordinary and these structures are among the best representations of the American architectural styles of the time, as many were constructed with enormous budgets with the purposes of impressing wealthy summer residents. All of these residents would have gravitated to the Redwood Library and Athenaeum, both for its assets, its age and the universal respectability of its purpose. Even as a nation was hacked with the deprivation of the Great Depression in 1935, the wealthy architect and Newport summer resident, John Russell Pope (1874-1937) completed a large addition to the Redwood Library. Like Mason‘s earlier addition, the new exterior construction would adhere to the style and axis set by Harrison‘s original building. John Russell Pope would become the architect of the National Gallery in Washington DC, which would be completed in 1941. The last major addition to the Redwood Library occurred at the very back of the structure from 1997 to 2006 by the esteemed firm Shepley Bulfinch Richardson and Abbot. This Boston firm is perhaps the oldest in the nation. Like the other firms to add to the Redwood Library, they added to the back of the building in a discreet and respectful manner. Whereas Harrison was a gentleman architect to practice his craft, as Thomas Jefferson did, largely for honor and pleasure, George Champlin Mason undertook self study. Mason opened a professional studio that undertook numerous projects for profit and trained the next generation of architects like George Champlin Mason Junior and Dudley Newton in the art and science of architecture. By the time of John Russell Pope, he was training at Columbia University and then at L’Ecole des Beaux Arts, receiving an academic training on a world class level. 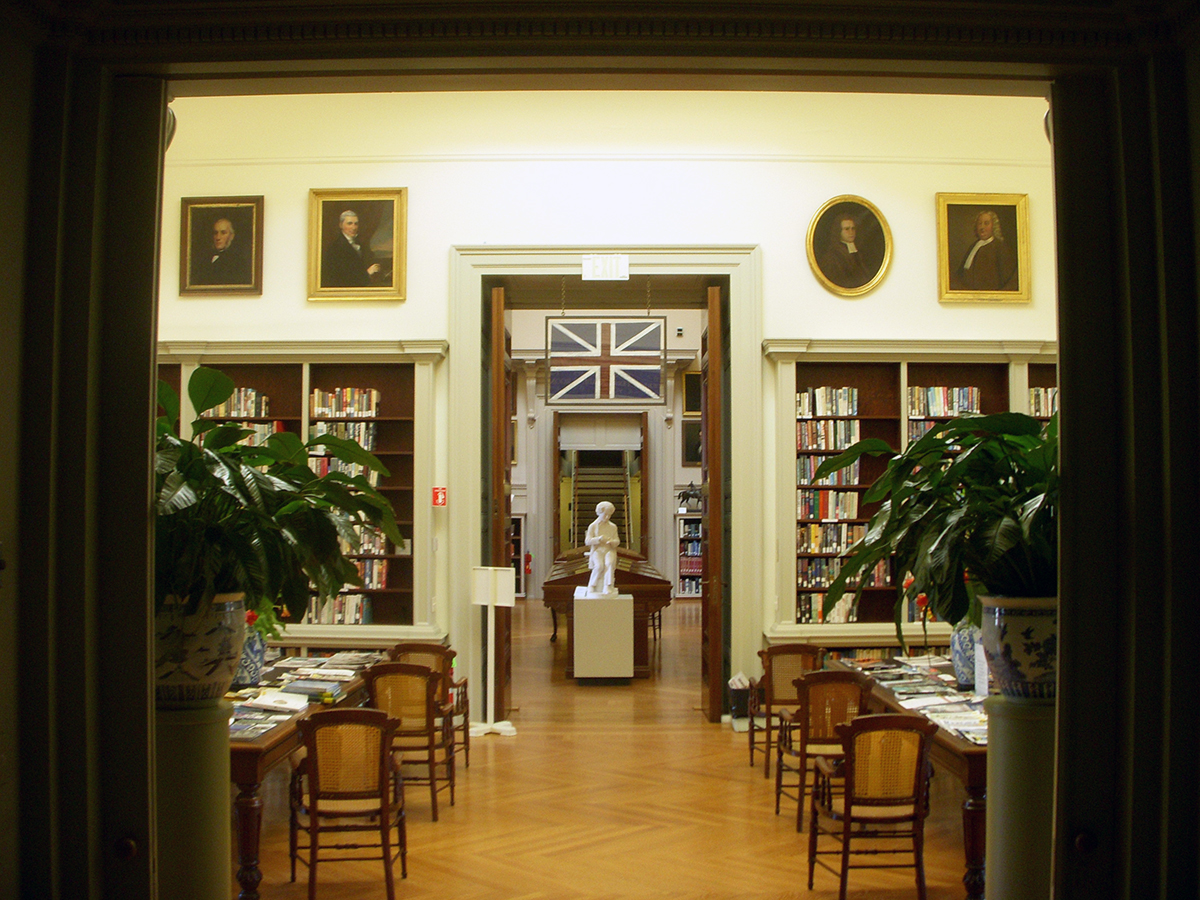 The professionalization of America’s architecture was far along by this point. In its design construction, the Redwood Library research reached back to the principles of the Roman architect Vitruvius, and became one of the great early Colonial structures in America, expanding both during the gilded age and 20th century. It was not only the design of one great American architect, but of four of them. It’s history and evolution follow the path of the history and evolution of American architecture as a whole, making it a microcosm for study and understanding, which were the very principles that the Redwood Library and Athenaeum had been originally founded upon.