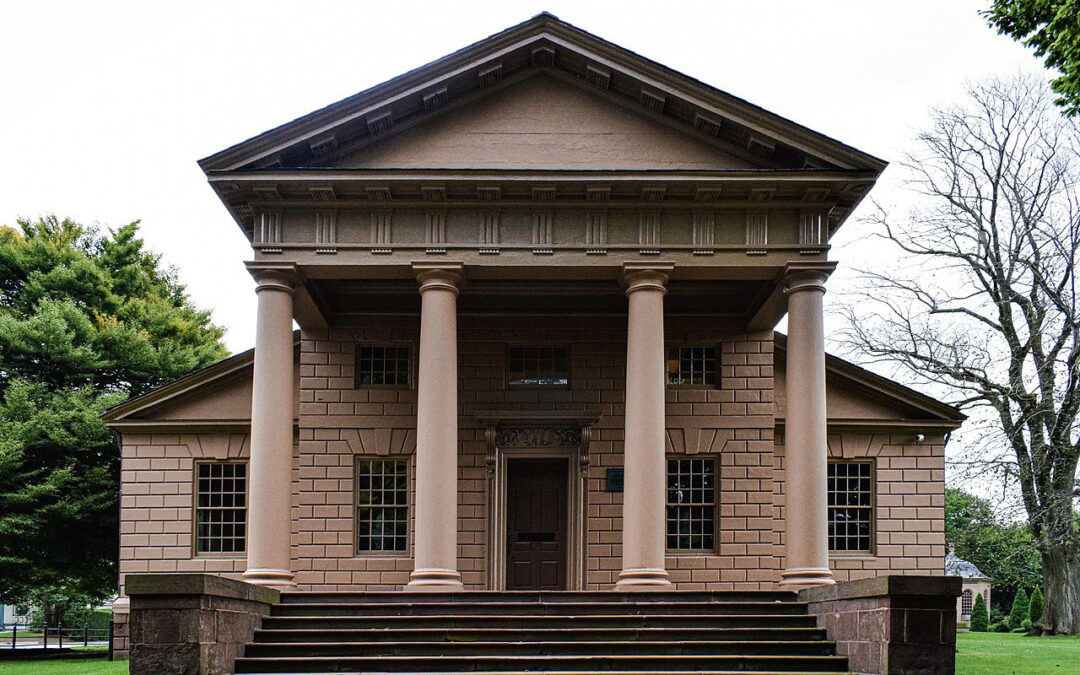 Among the many great architects who have worked in Newport, RI over the years, Peter Harrison (1716-1775) is often considered the first “true architect,” not only in Newport, but in the American colonies. There were accomplished architect-builders (like Richard Munday) prior to Harrison, but with Peter Harrison, the act of designing became a totally separated art from the act of building. It is this development and evolution that frequently marks him as one of America’s first true professional architects.

Peter Harrison, like many who lived in Newport during the Colonial Era, was born in England and thoroughly considered himself to be an “Englishman” his entire life. He and his brother, Joseph, immigrated to the Colonies circa 1740. Although it is not evident precisely how Harrison received his architectural education, it is believed that he returned to England from 1743-1745 to become apprenticed with an unknown aristocratic scholar of architecture. Upon returning to Newport, Peter Harrison would not have been a wealthy man in his own right, but would have been seen as a cultured and highly educated individual. His time in Europe would have given him the opportunity to begin to build a collection of books on architecture that would provide the basis for his future designs. 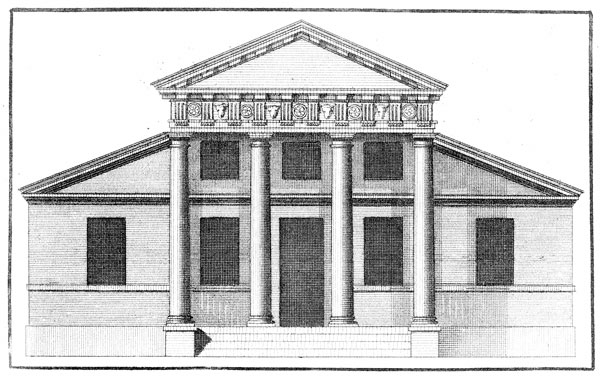 What is known is that Harrison was a bibliophile who, over the course of his life, built a substantial collection of books on architecture in a time that books were precious and extremely valuable. His interest in the writings of the Roman architect Vitruvius (c. 80 BCE-15 BCE) and the work of the 16th century Italian architect Andrea Palladio (1508-1580) are evident from his earliest works. In 1748, shortly after his return from England, Peter Harrison was engaged to do the design of the new Redwood Library and Athenaeum that was built in 1750 on the hill high above the bustle of the waterfront docks and the growing community of Colonial Era residences being built on Historic Hill, as it is now known. 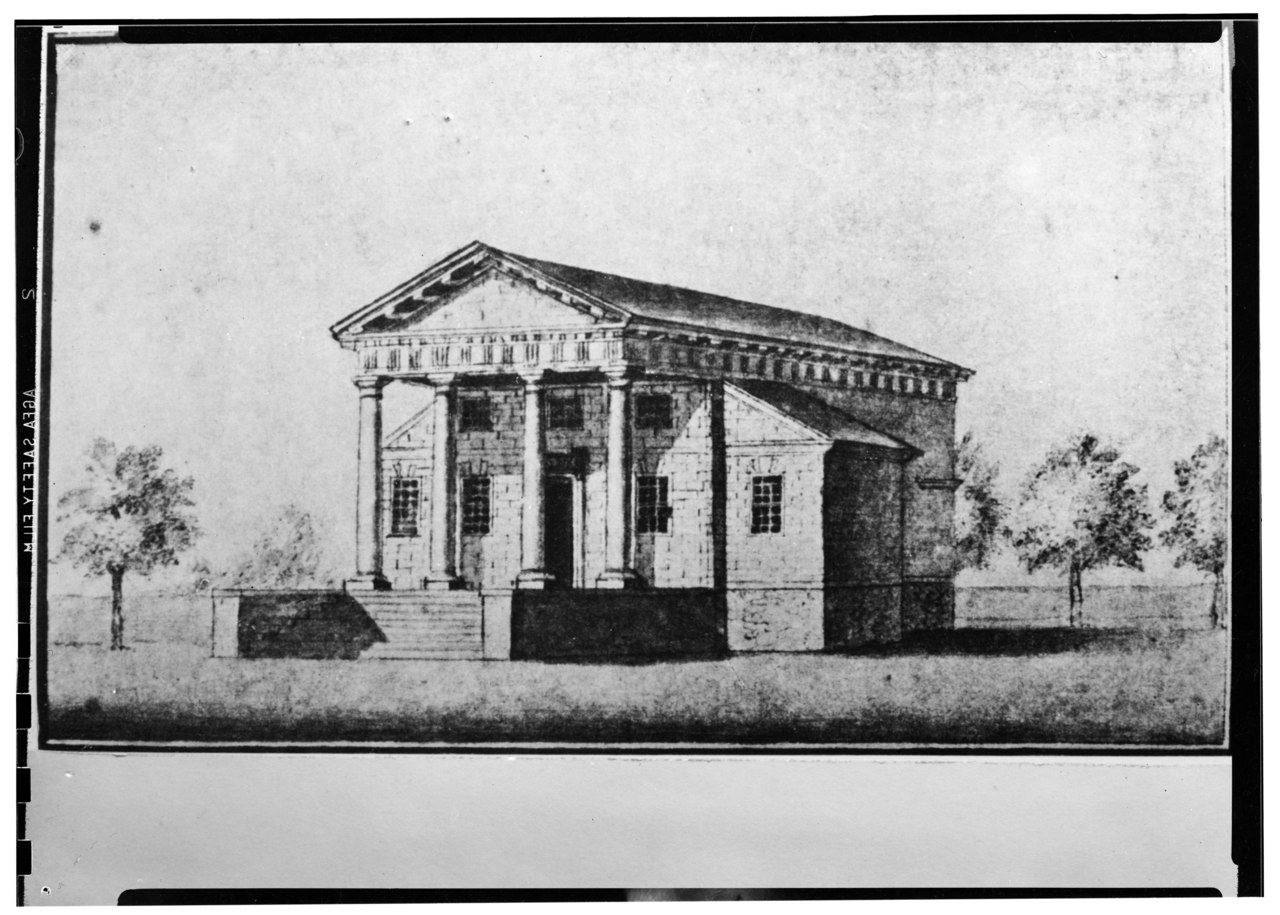 For the model of the building, it seems clear that Harrison was drawn to an image from Palladio’s Quattro Libri (“Four Books of Architecture”). The library was originally one large central room (now known as the Peter Harrison room) with smaller gallery rooms flanking it to the North and South sides. The building, although constructed of wood, was built with “rustication,” or panels, on the outside to look like more expensive and permanent quarried stone blocks. In front of the building, as befit America’s first lending library and institution solely dedicated to the dissemination of knowledge, was a classical pediment supported by four columns, reminiscent of the Parthenon – the ancient seat of learning at the Acropolis in Athens, Greece. 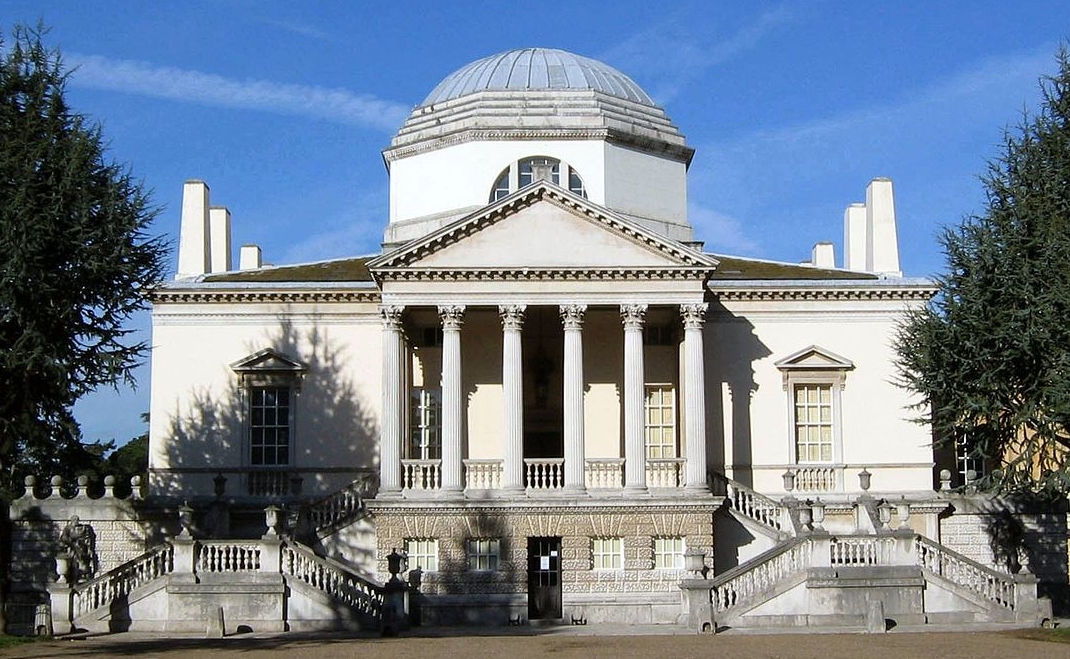 While this classical pediment has become a standard feature of countless schools, town halls, and other civic structures in America in the more than two and a half centuries since the building was constructed, at the time the Redwood Library was built, this architectural form would have been a revelation and dramatic example of an architectural type that the vast majority of colonial inhabitants of Newport would never have seen before. The Redwood Library has been identified as one of the very earliest “classical” buildings built in America on the Greek and Roman models of architecture that were being unearthed in the 16th and 17th centuries in Greece and Italy. These designs structures were being promoted in England by architects like Inigo Jones (1573-1652) and Richard Boyle (1694-1753), third Earl of Burlington, in the design of his own country estate, Chiswick House, completed in 1729 in association with architect William Kent. 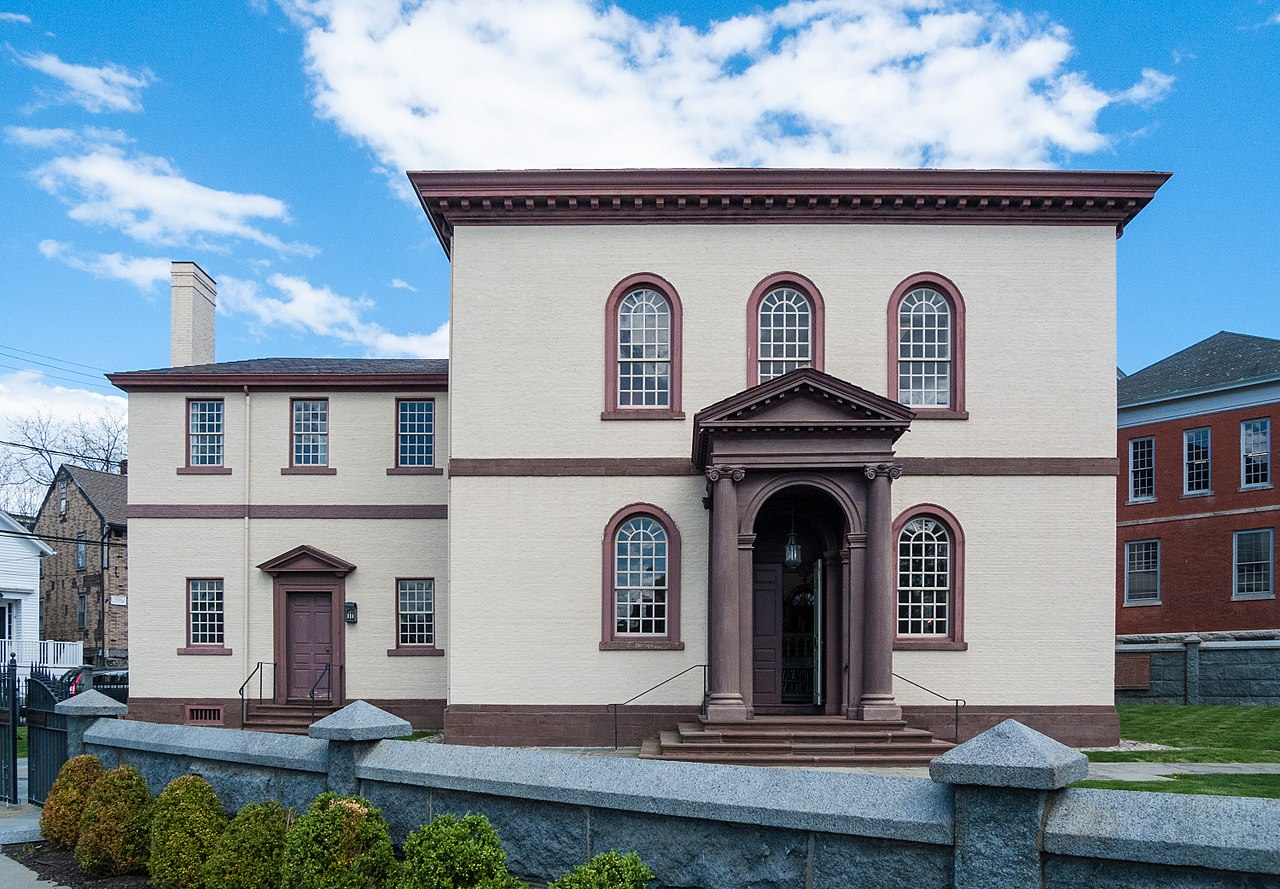 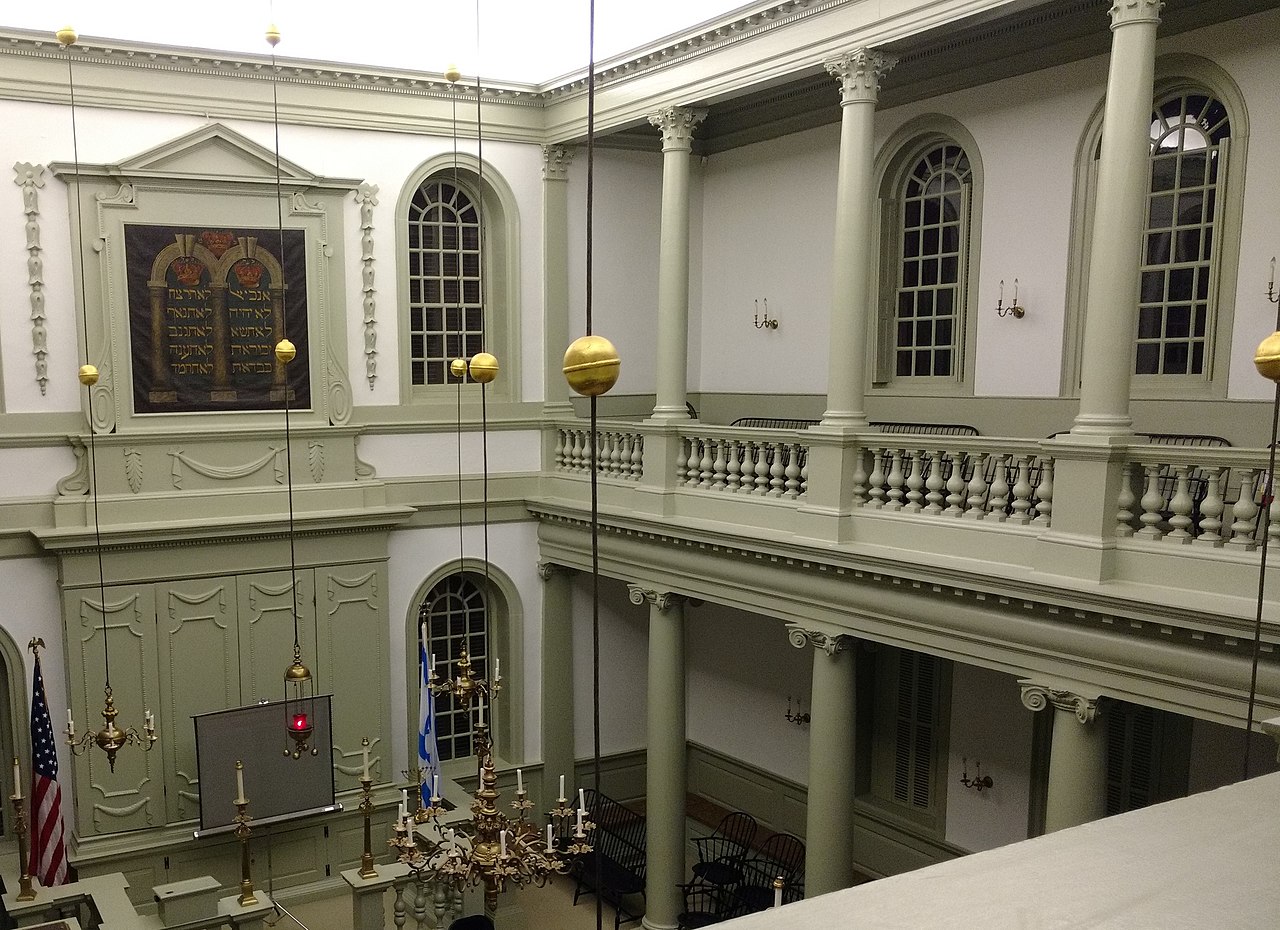 In his plan for the Touro Synagogue in 1759, Peter Harrison would again have needed to use his library to provide a model for the design, as he would never have seen an actual synagogue in person. He created a building that historian Ron Onorato aptly described as “an architectural metaphor for the experience of Jewish life in the eighteenth-century Newport: lives richly led within the community of faith but presented with modest rectitude to the broader, albeit tolerant, citizenry.” The structure is austere and purely geometric on the outside, with only a pediment entry porch to hint at the elaborate classical interior of intricately carved woodwork and Corinthian columns over Doric carrying the upper balcony. These are likely among the first examples of these column types in the American colonies, and the Touro Synagogue is now the oldest building of its type in the United States, spectacularly intact and preserved from the time of its construction. 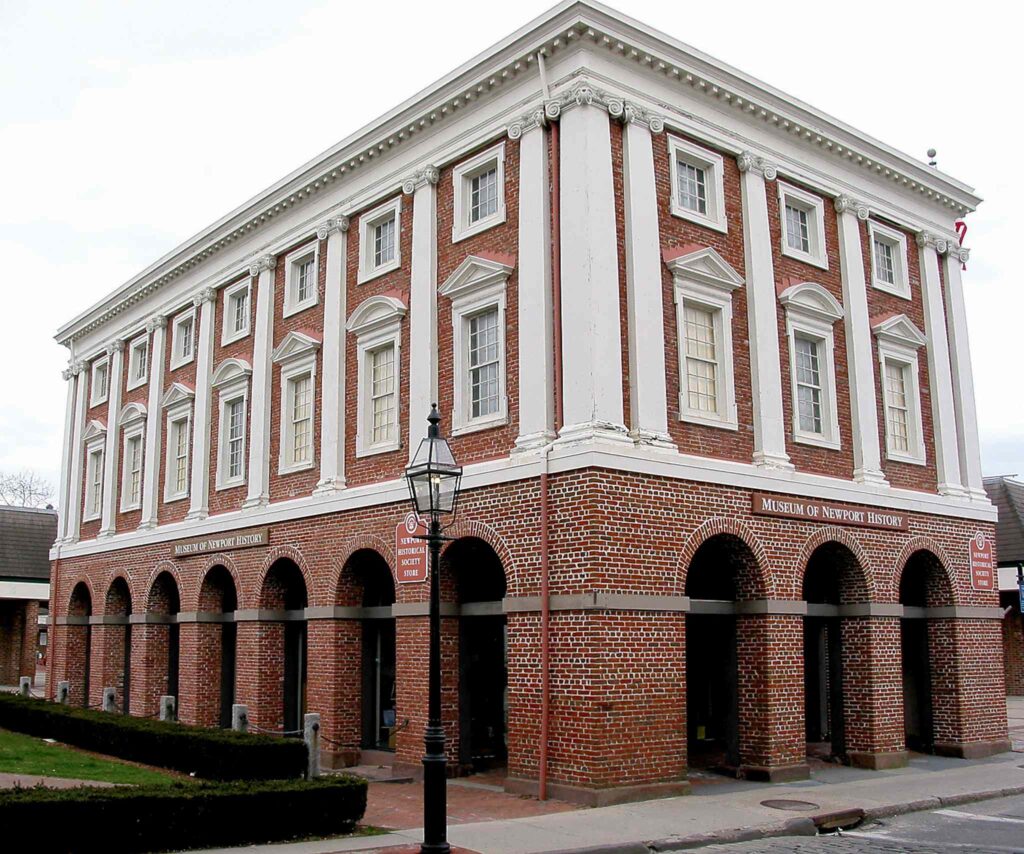 If the Redwood Library represented learning, and the Touro Synagogue came to embody the Jewish faith during colonial times, Peter Harrison’s design for the Brick Market (1762-72) shows his versatility and creativity. This structure was designed at the foot of Queen Anne Square (renamed Washington Square at the passing of George Washington in 1799) to serve as the place where goods could be brought up from the docks of Long Wharf and sold at covered booths to the citizenry of Newport. The design, like others in his past, drew inspiration from historical examples found in his books. In this instance, it looks like Harrison drew on the design of the Royal Banqueting Hall by Inigo Jones, which in turn drew upon Palladio’s design for the Palazzo Orazio da Porto. 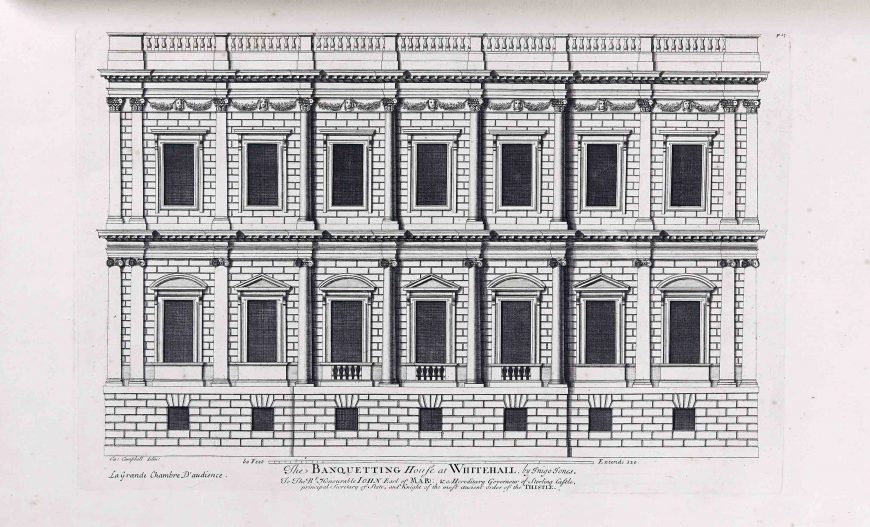 This brick structure, built for commercial use, nonetheless carried the elegance and proportion of the grander European precedents and served as a temple of commerce to balance the Old Colony House structure built at the top of the square by Richard Munday, also in brick. These two brick structures would have stood out prominently in a city where brick was rare and precious and the vast majority of structures would have been wood clapboard or cedar shingle. 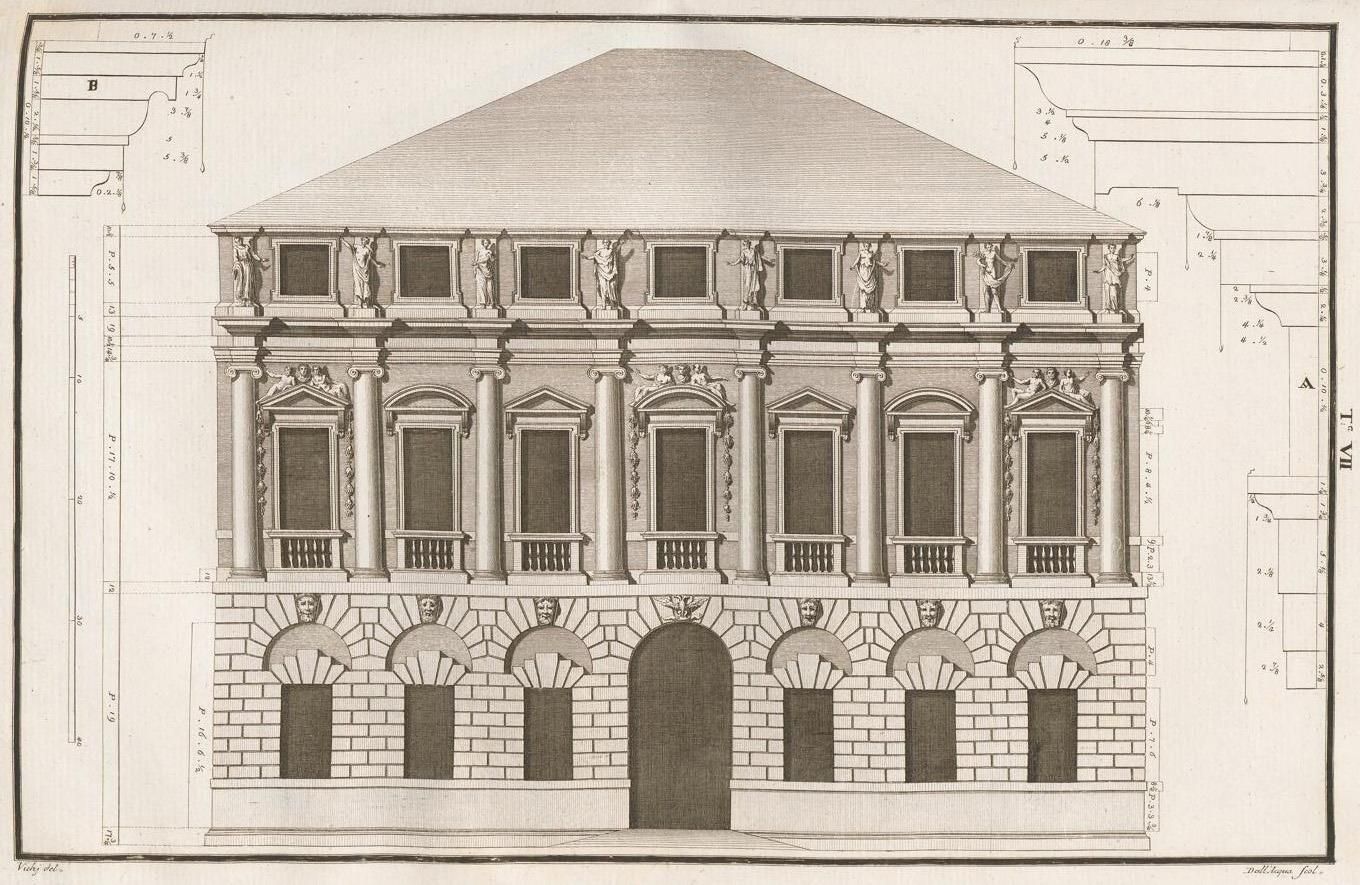 As tensions between the Colonies and the Crown began to rise prior to the Revolutionary War, Peter and Joseph Harrison, who were both staunch Tories and strongly loyal to the King, moved from Newport to New Haven, Connecticut. Peter Harrison died prematurely in 1775, supposedly of a stroke, at the age of 58. Soon after, because of his strong affiliation with the English king and rule, his house in New Haven was attacked by a secessionist mob and burned. As a result, his library of reportedly 50-60 books, which was a vast treasure-trove in that era, was destroyed, along with his archive of architectural drawings. Sadly, this makes documenting many structures that purport to have been designed by Harrison impossible to confirm with certainty. At the time of his death, Peter Harrison was a well-acknowledged and respected architect, and will always be remembered as one of the primary individuals responsible for bringing Vitruvian and Palladian classical architecture to the American colonies.