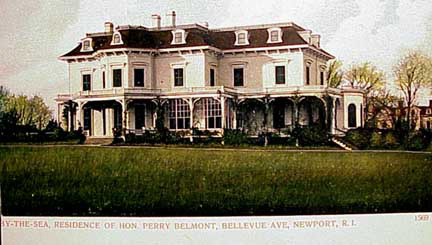 Among the many great architects who have worked in Newport, RI over the years, George Champlin Mason Sr. is perhaps the greatest and most prolific “Home-Grown” talent. He was born in 1820 in Newport to a prominent family and was the great nephew of Oliver Hazard Perry, the Newport-born “Hero of the Great Lakes.” Mason spent his youth in Newport and moved to New York at the age of 15, where we worked in a dry goods establishment for six years. In 1841, because of poor health, he departed for Europe where he studied in Paris, Rome and Florence, specializing in landscape painting. In 1846, he returned to the United States and married Elizabeth Dean and re-settled in Newport Rhode Island where his son George Champlin Mason Jr was born in 1849.

Mason,  spent much of the 1840’s working unsuccessfully to make a living as a landscape painter. During this period, he published Newport and Its Environs, which was a collection of 11 engravings of his landscape views of Newport. It was one of the earliest books about Newport to showcase its potential as a vacation destination and, although it was noted as “Volume 1”, no further volumes were ever published. This project did however introduce Mason to the world of publication, which would become important later in his career. 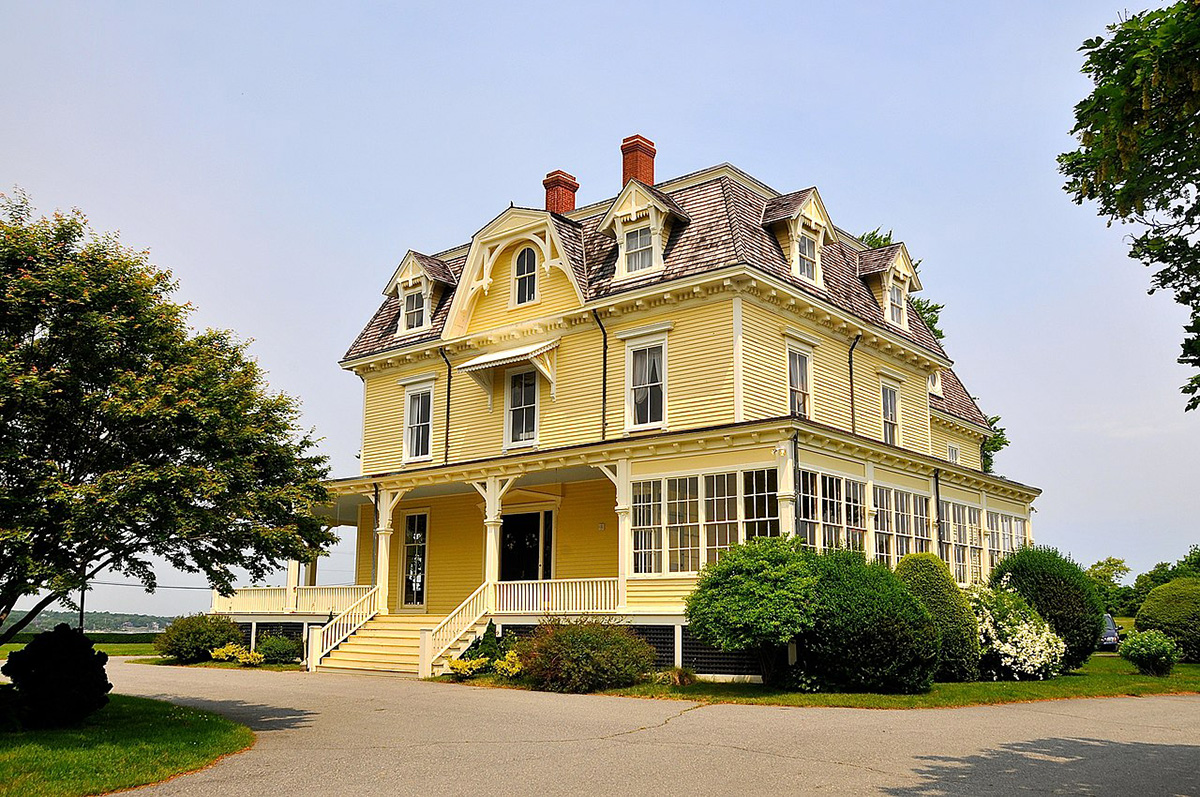 Because of his strong educational background for the period and his firsthand familiarity with the great buildings of the European cities, Mason was considered one of the great Renaissance men of mid- Nineteenth Century Rhode Island. In 1851, Mason switched professions and became part owner and editor of the Newport Mercury newspaper. He often wrote on architectural subjects, and he worked with fellow citizens on developing the then-expanding development of Newport. Beginning a few years later, he would occasionally write articles for the Providence Journal, the New York Evening Post, and other newspapers, sometimes using the pen names ‘Aquidneck’ or ‘Champlin’.

In 1854 he published Newport Illustrated, a guidebook that emphasized the history of Newport buildings and places. In 1884 he published a compendium of his occasional pieces under the title Reminiscences of Newport. Both of these works were illustrated with black-and-white line drawings or engravings of Newport buildings, many of which are now long gone or substantially changed, and so it serves as an important resource to Architectural historians. Mason was also influential in the establishment of the Newport Historical Society (originally a branch of the Rhode Island Historical Society), and he was active in the Redwood Library and Athenaeum and many other Newport organizations.

Around 1858, Mason resigned his editorship and began to study architecture in earnest. Just two years later set himself up as an architect, opening the first professional architectural firm in Newport, where many of his nearly 150 buildings were designed and constructed. His timing was excellent as this was a period of great economic expansion, resulting in what is now remembered as the “Gilded Age.” This term was coined by Mark Twain as a term or derision, but aptly described a time when New Yorkers, Bostonians and other men (and women) of extreme wealth were building large summer homes in Newport. Mason became the dominant architect of these residences in the 1860s. In 1860, Mason was commissioned to build the financier August Belmont’s summer mansion “By-the-Sea”. The commission came to him through Belmont’s wife Caroline, who was a daughter of Commodore Matthew C. Perry, who was a relation of Mason’s. This house was an Italianate villa with many of the features that would become hallmarks of Mason’s style: a formal, blockish building giving an impression of solidity; a modified French mansard roof; a three-bay entrance portico; and extensive use of bracketed trim. These are also hallmarks of what is now known as the “Second Empire Style” and Mason was a master of the form.

Also in 1860, Mason designed another large Italianate villa as a Newport summer home for Edmund Schermerhorn that was called “Chepstow.” This property was bequeathed to the Preservation Society of Newport Country by it owners in 1886, along with most of its furnishings, and is open to visitation by architectural scholars and on special occasions. 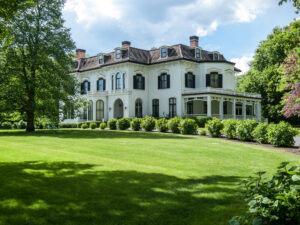 In 1867, Mason’s son began working with him, and in 1871, he brought his son into partnership and renamed his firm George C. Mason & Son. In 1873, the firm designed the commanding officer’s quarters (today known as the “Eisenhower House”) at Fort Adams in Newport, which President Dwight D. Eisenhower used as his summer residence throughout his administration. Another building called “Woodbine Cottage,” which Mason built for himself in 1873 in collaboration with his son, was a 23-room mansion in an ornate Swiss chalet style. Like the slightly earlier “Edgewater” (1869–70), it features the elaborate kinds of filigree wooden trim that increasingly crept into Mason’s later work. It has since been turned into a hotel called, very appropriately, “the Architect’s Inn.” 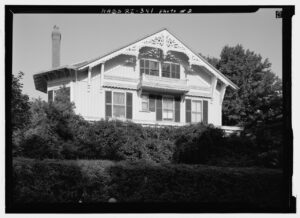 Mason died in 1894 in Philadelphia, Pennsylvania, and was buried in the Island Cemetery of Newport. For his work as a promoter of Newport, as a scholar and most importantly, as a prolific and influential architect, Mason was inducted into the Rhode Island Heritage Hall of Fame in 2006.

Although many of Mason’s buildings have been demolished to make way for residential subdivisions or for other structures, many of his designs survive to this day and carry on the legacy of his and his son’s design style up to the present day. In looking at the work of McKim Mead and White I have noticed that many of the interior motifs that they are famous for are present in Mason’s earlier designed structures. As many architects were invited to update and expand on the Newport houses Mason & Son created, they would have become very familiar with their works and designs and could not have helped but be influenced by the careful and considered architecture that the Masons created. George Mason, because his work was largely constructed within Newport, is not well recognized on a national level but, in retrospect, his impact on American Architectural design is an enormous one because of where he was doing his work and who he influenced.

Looking to design or remodel a building to its fullest potential? Let’s discuss your ideas.