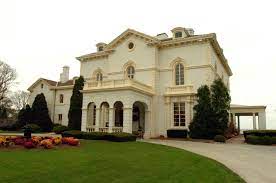 As most Newporters are well aware, the great mansions along Bellevue Avenue were primarily built during the Gilded Age. This was the period from about 1880 until the First World War, when some of the wealthiest and most powerful people in America were drawn to the “City by the Sea” as a place of summer relaxation and pleasure. Perhaps Newport stands on the cusp of once again being in the spotlight and drawing the attention of the wealthy and powerful.

It has been reported this past week that Beechwood, which was purchased by the noted sailor and billionaire Larry Ellison, may become a museum holding his 18th and 19th-century collection of art. Mr. Ellison is reputed by Forbes Magazine to be the third wealthiest American with a net worth of $33 billion and is famous for winning America’s Cup in 2010 in Valencia Spain and returning the prize to the United States. The next America’s Cup series will be raced this year and one of the preliminary scheduled series of races will be held in Newport so the city is busy getting ready to welcome the sailing fans and media that will descend upon the city at that time. In order to achieve the design proposal being set forth, five Historic District approvals are needed for the renovation, but no setback or coverage variances are required and the property will stay on the tax rolls according to the lawyers hired to represent the application.

Beechwood has had an interesting history of rises and falls. It was originally built for Daniel Parish in 1853 by Calvert Vaux and Andrew Jackson Downing in a Florentine Palazzo style. This was in the era before the gilded age when wealthy merchants and plantation owners from the south began to build large comfortable homes in Newport and Vaux and Downing were noted designers during the early part of the Victorian era. Just a few years later in 1856, the original structure burned down but a replica (the current building) was constructed closer to the Cliff Walk and has magnificent water views.

In the 1880s, the lovely and comfortable house was purchased as a summer residence by Caroline Backhouse Astor, the central figure and grand hostess of the famous “Four Hundred” — named for the number of select individuals that could fit into her New York ballroom. It was during the Gilded Age that many of the merely enormous houses like Beechwood and Kingscote were purchased for the purpose of enlargement. In 1888, Mrs. Astor engaged the noted American architect Richard Morris Hunt to add a ballroom to this structure so that the elaborate social gathering she orchestrated in New York could continue to be conducted in Newport through the summer months. Once the Astors set the precedent, many of the great houses built during the remainder of the Gilded Age would have either a ballroom or a large entertaining space dedicated to entertaining so that invitations to grand parties could be properly reciprocated. It was at the time of the Astor’s ownership of the house that it grew to the 26,000 square feet in size that it is today.

Prior to being purchased by its current owner in January of 2010, Beechwood operated for many years as a living history museum with a troop of actors serving as tour guides enacting various nineteenth-century characters (from the Astors themselves to the cooks in the kitchen) to assist visitors in better understanding what life was like during the Gilded Age.

One of the keys to successful Historic Preservation is finding new uses for old buildings which are no longer need or used as they were originally designed. Many of the great Newport houses owned and operated by the Preservation Society of Newport County exist only through their reuse as house museums and these buildings have become among the most popular tourist attractions in New England, bringing hundreds of thousands of visitors to the community each year. In the case of Beechwood and other great Bellevue Avenue mansions, perhaps it is only fitting that a new generation of wealthy individuals and families should take up the banner to undertake the preservation and transformation of the historic buildings built or enlarged during the Gilded Age and to figure out how they can be made useful long into the future.

Ross Sinclair Cann, AIA, LEED AP, holds degrees from Yale, Cambridge, and Columbia and is a historian, educator, and practicing architect living and working in Newport. This article was initially published in ARCHI-TEXT, in Newport This Week, January 12, 2012.