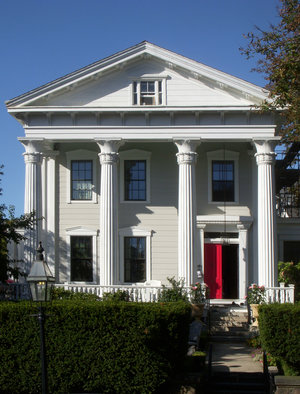 The Captain Littlefield House is located on Historic Hill in Newport, Rhode Island. Its neighbors are other Greek Revival structures but have been done in a simpler tone. It was built by John Ladd in 1836, and is an especially exuberant version of the Greek Revival style in Newport, exemplifying such characteristics as:

The Greek Revival style in Newport and beyond is often seen both with and without front columns.

Other defining characteristics of Greek Revival homes include a window in the pediment, symmetrical shape, and cornices and friezes that can be plain or highly decorated, according to the builder’s wishes. Chimneys were placed as far back as possible, so that the home would closely resemble a Greek temple .