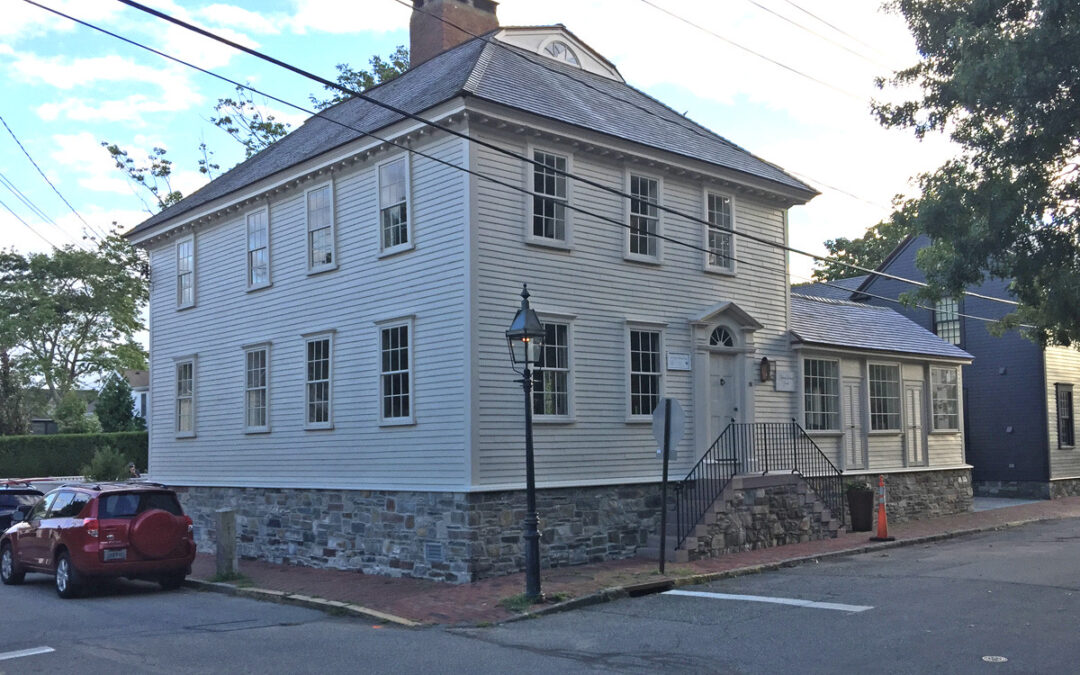 Newport is rich with history and historic charm visible through many beautifully designed buildings and homes. Preservation and maintenance of these buildings has fallen to the people who presently inhabit the area. Newport’s culture and history has gone through many shifts. Initially, a seaport for the colonies, then transformed into a glamorous vacation destination during the Gilded Age. This is the era that sparked and influenced many of the now famous buildings scattered around town.

Doris Duke, the inspiration of this award, was a famous Newport socialite who was well known for her extravagant lifestyle and parties, and once noted as the wealthiest woman in America. She had a passion for saving colonial buildings and architectural gems throughout Newport with help from the Newport Restoration Foundation. She saved more than eighty homes in her lifetime, and nearly all of them are still standing.

This year’s 16th annual Awards Gala will be held both virtually and in person on September 9th. Awards are given out to honor acts of preservation, restoration, and maintenance of Newport’s historic character.  The Awards are a collaborative project between the Newport Restoration Foundation and the City of Newport and excitedly, for the first time ever, five preservation awards will be given out in a single year.

Andy Seagal and Karen Weber are being awarded a prize for the restoration of the Christopher Townsend House that was originally built on Bridge Street in the Point Neighborhood in 1725. This is the first house to comply with the new Newport guidelines for raising historic houses to balance their historic character with the need to elevate them due to future storm hazards associated with climate change and rising sea levels. The house was used for the 2016 “Keeping History above Water” conference which Ross Cann participated in. The building itself was actually owned by the NRF until it was sold to Segal and Weber. This is a house that the A4 Blog has frequently mentioned in the past.

The second award is being presented to George and Susan Petrovas for the exterior renovation of their house “Midcliff”. This Queen Anne Revival style house was design by the Boston firm, Peabody and Sterns, and was originally completed in 1886. The house had been cut up into apartments and the Petrovases wanted to return the house to its former historic glory. Work on the project includes restoring failed roofing, chimney restorations, removal of lead-based paint and a complete replacement of the cedar sidewall shingles and trim by the construction firm of Kirby & Perkins. 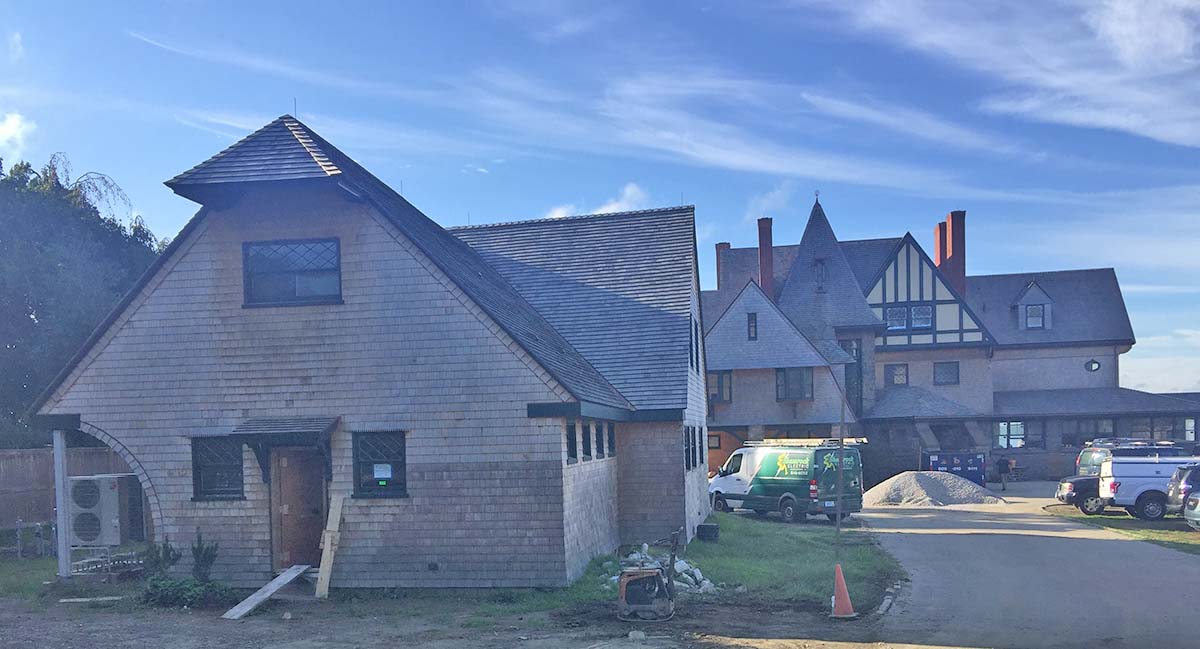 The Preservation Society of Newport County, for who A4 Architecture has designed many projects over the years, is being awarded a Preservation Award for the restoration of the Serpentine Path at the Breakers following the completion of the new Visitor’s Center several years ago. Upon doing research for that project, the Preservation Society became aware how much the landscape elements of the original houses had changed and degraded over time and the Serpentine Path project is just the first of a multi-step project to upgrade and restore the 13-acre property surrounding the Breakers, one of the grandest Gilded Age houses and one of the largest single-family residences to ever be built in the United States. 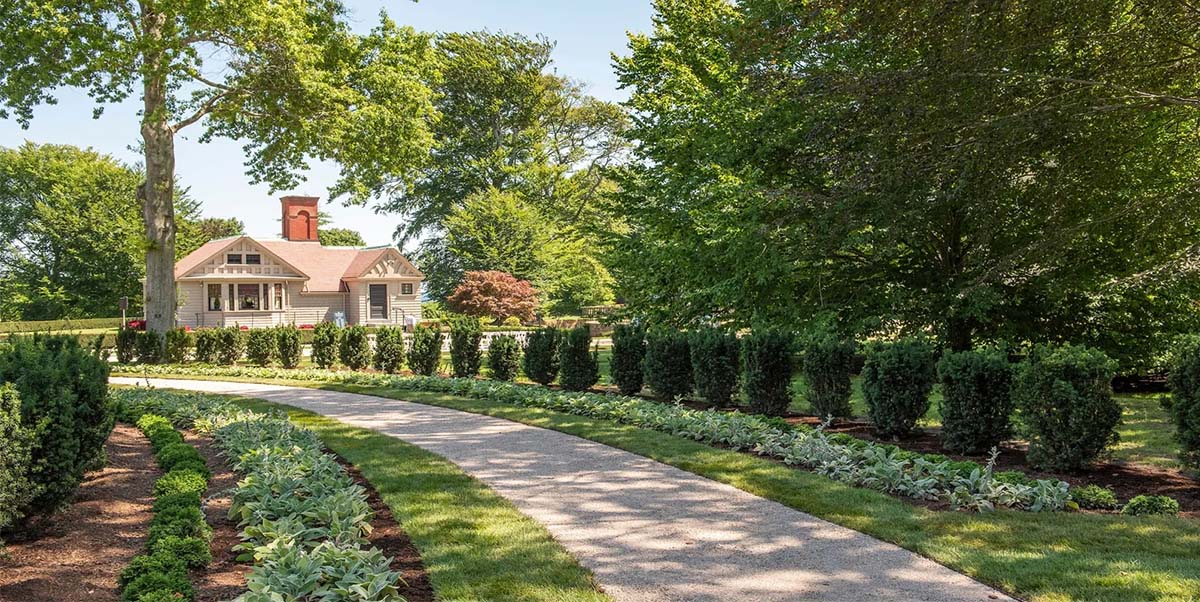 An award is being presented to Michael Terra for the restoration and renovation of the Trevett School, originally built in 1809. Originally built as a small neighborhood schoolhouse on Barney Street, the building was first moved to Cheery Street and finally to its current location on Third Street in the Point Section of Newport.  Significant care and expense were taken to replicated the original belfry and exterior character of the building, while the interior was adaptively converted to function as a compact luxury residence.

The fifth of this year’s Doris Duke Preservation prizes is being presented to Niko Merritt for the development of an interactive “Rise to Redemption” walking tour that offer a look into the life and times of Newport’s African American community during the eighteenth century. This program goes beyond just the often ignored or understudied chapter of enslavement of people of African descent, but focuses on Duchess and John Quamino, who fought for their freedom and became influential members of a vibrant Black community that arose in Newport during their time.

A4 Architecture is now pleased to have its clients win three Doris Duke Preservation Awards, and we hope to help to design many more in the future. Newport is a city whose future prosperity has often been built on the building and heritage of its past and it is wonderful that this connection is celebrated each year by these awards, now in their sixteenth year.

Ross Sinclair Cann, AIA, LEED AP, is an historian, author, educator and practicing architect living and working for A4 Architecture in Newport, Rhode Island and was the architect for several Doris Duke Preservation Award winning projects.