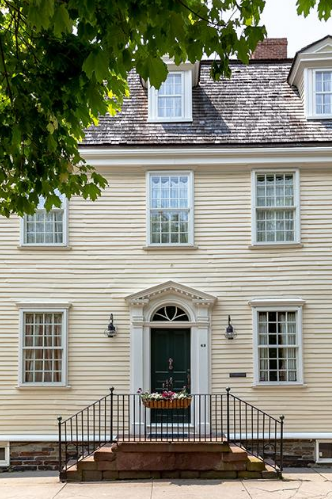 In Thornton Wilder’s famous final novel, Theophilus North, the author described Newport as “nine cities” — distinct communities that overlapped one another to form the entire “City by the Sea.” With apologies to Wilder, I’d like to increase that number to an even dozen, and tell Newport’s story through its streets. These 12 majestic thoroughfares paint a picture of Newport in all its varied and wonderful qualities: from its gorgeous geographic setting to its rich architectural history, and from quaint Colonial city to grand Gilded Age resort.

In 1639, Newport was settled around a freshwater spring, and an open space was built close by as the public commons. Over time this area became the civic center of Newport and was renamed Washington Square following the death of George Washington in 1799. Located just to the west of the Old Colony House, Washington Square is where the Declaration of Independence was first read to the citizens of Newport in 1776 — a tradition that is repeated every Fourth of July. The beautifully planted open space has become known as Eisenhower Park, and the short road on the north side (once called the Parade, because it was the site for all great gatherings) is also known as Washington Square. In recent years, the sidewalks have been widened for outdoor dining and all the buildings have been renovated, reclaiming this handsome streetscape as the center of Newport civic life.

Located in the Point neighborhood, Washington Street is Newport’s original grand promenade, lined with large, Georgian-style homes built by the city’s wealthiest merchants. The entire neighborhood was originally the farm of Newport founder Nicholas Easton, and was purchased and subdivided in 1725 by Quaker merchants who came to Newport seeking religious freedom. Originally called Water Street (as the Quakers avoided naming streets after people), the street was renamed after George Washington’s death. This street overlooks Goat Island and the deep-water harbor where merchants tied up their boats on docks extending off their property. As most of Newport’s livelihood at that time was connected to the water, paths between the houses extended down to the water, and these public right-of-ways exist to this day. The street has two lovely parks (Storer Park and Battery Park) where you can stroll right up to the water’s edge to watch a spectacular sunset or admire the deep blue waters which were the lifeblood of Newport during the Colonial era.

Bannister’s Wharf played an important role in Newport’s commercial life back in the 18th and 19th centuries and continues to do so today. This street is lined with Colonial-era buildings like the Clarke Cooke House that were relocated when America’s Cup Avenue was built through the middle of downtown in the 1970s. The charming stores, fine restaurants and dock flanked with yachts capture the sense of what the waterfront area once was and what it has become today — a commercial and tourist destination.

Moving away from the water, Kay Street marks one side of the Kay-Catherine neighborhood, an area that was developed just before the Bellevue Avenue mansions were constructed. Kay Street, in particular, is noted for its beautiful Queen Anne–style buildings, some of which are now inns and condominiums, but retain their grand character. Many of these houses were designed by George Champlain Mason, Newport’s great resident architect of the 19th century, and the street retains the prosperous character it had 150 years ago.

Most cities would be lucky to boast a single work of architecture by the famous firm of McKim Mead and White. Red Cross Avenue has four of them, with another two right around the corner. Most of the buildings on this street, which connects Old Beach Road to Memorial Boulevard, were built in the 1870s and ’80s as Newport was growing in popularity and stature. They include the Katherine Wormeley Prescott House, the Frances Skinner House (known as Villino), the Samuel Coleman House and the George Gordon King House (known as Oakwood). Rich in Queen Anne and shingle-style architecture, the street is unusually wide compared to the roads laid out during the Colonial period, which were just wide enough for two horse-drawn carriages to pass.

There are streets in Newport that are shorter than a football field. One of these little gems is Touro Park West. Situated between Mill and Pelham streets, this cute roadway has room for only two houses — although they are gracious in size and grand in style. Across the street from the houses is Touro Park and the famous Newport Tower, which is probably the oldest existing structure in Newport. The tower was among Newport’s earliest tourist destinations, and was so popular that a replica was built by a hotel on Ocean Drive to give guests the experience of seeing the original.

Sometimes beauty should be measured in relative change over time, which is why I’ve included John H Chafee Boulevard on this list. Before this street was constructed in 2006, the north part of Newport was dominated by deteriorated World War II military buildings. During the renovation, this street was transformed into a wide, planted boulevard leading to the new CCRI building through a neighborhood of attractive, affordable single-family houses. The pride the residents take in maintaining their flower gardens and keeping their streets free of debris is evident, and an example of how an area can be transformed with good design and the loving care of its residents.

Broadway is one of Newport’s oldest streets, but also one of its newest. Originally built as the road up to Providence, its curbs and walkways were remodeled a few years ago to encourage sidewalk dining and safer crossing. Since then, this section of town has become rich with hip restaurants and bars that attract customers throughout the year, underscoring the ultimate story of Newport’s streets: That everything old is eventually new again.

Any description of Newport’s streets must include its grandest and most famous boulevard, Bellevue Avenue. What had once been little more than a farm path was developed by Alfred Smith in the 1860s and ’70s as a destination for the Gilded Age elite, who were able to get to Newport by ferry rather than the arduous overland route. Smith sold lots up and down the newly created road with a membership to the Spouting Rock Beach Club offered as an inducement. His timing was perfect, as the street quickly became lined with mansions built by the wealthiest families in America, making this farmer’s son one of Newport’s wealthiest full-time residents. During the construction of these mansions, specimen trees were planted along the sides of the street. In the intervening century, they have formed a magnificent canopy that arches over the roadway like a natural cathedral. There are few grander streets in the world than Bellevue Avenue, which is why millions of visitors drive and stroll down its magnificent length each year.

Since its founding in 1934, Salve Regina has grown from a single building to a university with dozens of properties, and Ochre Point Avenue has become the central spine that links the campus together. The school has worked hard to restore many of the historic buildings it has acquired, and today this street is a charming blend of grand converted homes that bustle with students during the academic year. The street is also the location of Newport’s grandest “summer cottage,” the awe-inspiring Breakers, built by Cornelius Vanderbilt in 1892.

In term of sheer natural beauty, Ocean Avenue is the preeminent selection. Not fully developed until the early part of the 20th century, Ocean Drive (as it is commonly called) offers 10 spectacular miles of road that weave in and out of the coves and along the rugged, rocky shoreline. Because of zoning, the houses are built on large, gracious lots, often set far back from the roadway. With the ocean on one side, saltwater ponds on the other, and gracious mansions along its length, Ocean Drive has become the ultimate place to experience Newport’s spectacular setting.

Many of Newport’s most charming streets are off the beaten path. Beacon Hill Road is just such a place, winding over Newport’s highest point and connecting Harrison Avenue to Hammersmith and Brenton roads. These streets are carved from what was once the enormous Arthur Curtiss James estate completed in 1916. Some remnants of the estate remain in the enormous stone carriage house on Brenton Road, the recently restored Blue Gardens, and Swiss Village, the fully working farm that — almost like Brigadoon — opens its gates to the public one day per year. Unlike the vast majority of streets in Newport that were laid out on a grid, Beacon Hill Road winds gracefully with the contours of the land, revealing new vistas with each twist and turn in the road.

This feature was published in the July 2019 issue of Newport Life Magazine.