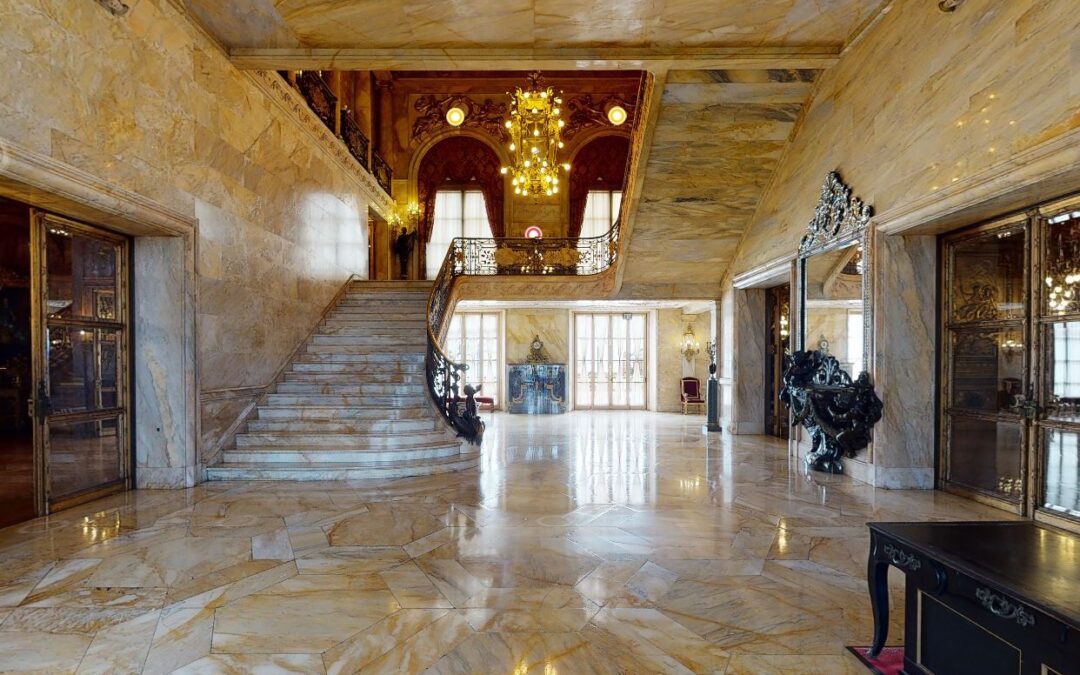 If there is one thing that the great houses of Newport were really built for, it is to throw a party. Many of the great “cottages” are really just enormous entertaining spaces with five and six-bedroom homes attached. One of the grandest ballrooms ever to be built in Newport is the one in Marble House, which was designed by Richard Morris Hunt in 1888 for Mrs. William K. Vanderbilt. This magnificent home is now part of the collection of buildings preserved by the Preservation Society of Newport County (PSNC) and is open for visitation.

Marble House was built at a reported cost of $10 million as a birthday present for Alva Smith, William K. Vanderbilt’s first wife. In today’s terms, that sum is equivalent to more than $100 million! Of all of the extraordinary rooms in this luxurious home, perhaps the most overwhelming is the ballroom, which is characterized by the large gilt sculptures and panels designed by the famous French firm Allard et Fils. This extraordinary room has undergone some renovation over the last several years under the careful direction of the Preservation Society curator Paul Miller, who drew on the company archives of the French designer to duplicate the color and pattern of the original fabric for the curtains with absolute precision.

The building was designed by Richard Morris Hunt (the first American-born graduate of the École des Beaux-Arts and the leading American architect of the last half of the 19th century) in an overtly French style. The building echoes the front façade of the White House, while the interior makes many decorative references to Louis XIV (known as the “Sun King” for his unmatched wealth and power). These details give some clue to the place of authority that the Vanderbilts wished to establish for themselves through the architecture that they commissioned.

In its day, the house was used to regularly entertain great dignitaries (including the Duke of Marlborough, to who the Vanderbilt’s daughter Consuelo was given in marriage). These events were conducted in “evening dress” — white tie and long coattails, which were the costume of society for any serious evening event. In fact, the “tuxedo” was first employed (and named) in the US by those who wished to have more “casual” attire for informal evenings at the Tuxedo Park Club, just north of New York City. Today “white tie” has largely been delegated to inaugural balls and other high diplomatic and social functions.

This past Saturday however, the clocks were turned back for the annual Hope Funds for Cancer Research Gala Awards. Marble House was once again filled with gentlemen wearing white tie and tails and ladies in long ball gowns in honor of the setting and of the 2008 awardees. These included Dr. Craig Mello (the 2006 Nobel Prize winner in medicine), Dr. Malcolm Moore (one of the premier oncology researchers in the country), Robert Bazell (NBC news’ senior science correspondent), and Gilda’s Club (an organization founded to help provide social support to cancer patients in 18 cities). Guests arrived from around the country to celebrate the achievements of these luminaries at a seated dinner for 140 on the back terrace and to then join in a dance for more than 200 in the very same ballroom where the Vanderbilts first entertained their guest more than 100 years earlier at the grand opening of the house in 1892. The Hope Funds event raised more than $200,000 to support research in the most difficult to treat cancers and raised awareness of the need for research into cancer–a disease that will affect one in three Americans during their lifetimes. The two postdoctoral fellows whose research is now being funded by the Hope Funds were on site to explain their research to the many doctors and scientists who were in attendance.

Many of the attendees and honorees who came from distant places and had never been inside the Marble House previously marveled that such a spectacular structure was ever built, and perhaps even more amazed that this grand building was still able to be used in much the same way as it was originally designed—for great and serious occasions where 200 guests fit remarkably comfortably. For the Newporters among the attendees, it was a marvelous reminder of the magnificent architectural treasures we often take for granted!

Ross Sinclair Cann, AIA is a historian and teacher who practices architecture and serves on the Marble House Committee in Newport, RI. This article was initially published in ARCHI-TEXT, in Newport This Week, August 9, 2008.