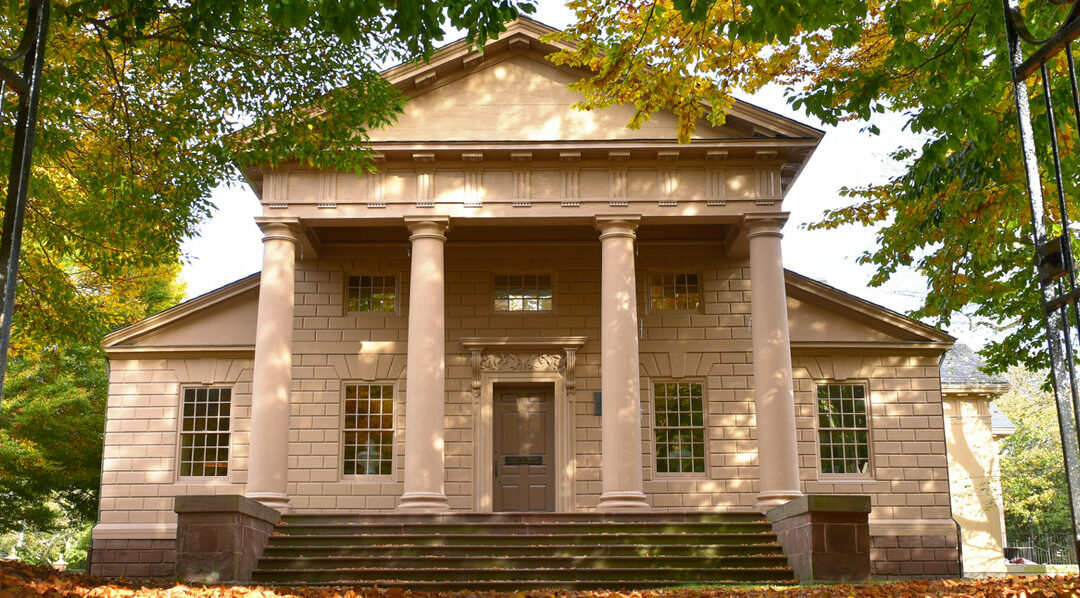 The Redwood Library is the nation’s oldest circulating library still in its original building. It was a product of the Philosophical Club, a group of local 18th-century businessmen who gathered around the famous Bishop Berkeley, a colonial-era religious leader, and thinker. The group wanted to establish a circulating library where members could discuss the issues of the day. The library was founded by 46 local businessmen in 1747. The primary donors were Henry Collins, who provided the land at what was then the edge of the town settlement, and Abraham Redwood, who provided a generous sum to help acquire books for the new institution.

Peter Harrison, a sea captain turned architect, designed the building. Harrison was also the designer of other important colonial structures, including the Brick Market (1761-72) and the Touro Synagogue (1759-63). It is believed that he emigrated from England to Newport around 1740 at age 24, but returned to England to be trained in one of the architecture studios maintained by the English gentry.

At that time, the “Neo-Palladian” style was sweeping away Medieval styles, which had long dominated in England. This “new” style was based on designs from nearly 200 years earlier by Venetian architect Andrea Palladio, who was emulating the classical architectural forms of Rome and Greece nearly 2,000 years before that.

Harrison is often credited as being the first American “architect,” because he was perhaps the first to be taught architecture and to have his designs built by others. This was a major change from the design-builders, like Richard Munday and Asher Benjamin, who dominated construction during the earlier part of the 17th century.

There is little doubt that Harrison drew his design for the Redwood directly from Palladio’s sketches that had been published in books. His genius was less in raw invention than in a skillful translation of two-dimensional images into workable three-dimensional buildings of quality and rich character.

The Redwood Library is often credited with being the first classically-inspired public building in North America and it had a major influence on Jefferson, who studied it closely during a visit to Newport in 1784. The connotation of the Greek democratic tradition that is implied by the pedimented façade was a natural fit for a nation seeking to revive a political tradition absent for 15 centuries. The tradition of American Classical architecture that began at the Redwood was emulated in Jefferson’s design for the University of Virginia, and it continues to be a major theme in courthouses, high schools, and other public buildings built to this day.