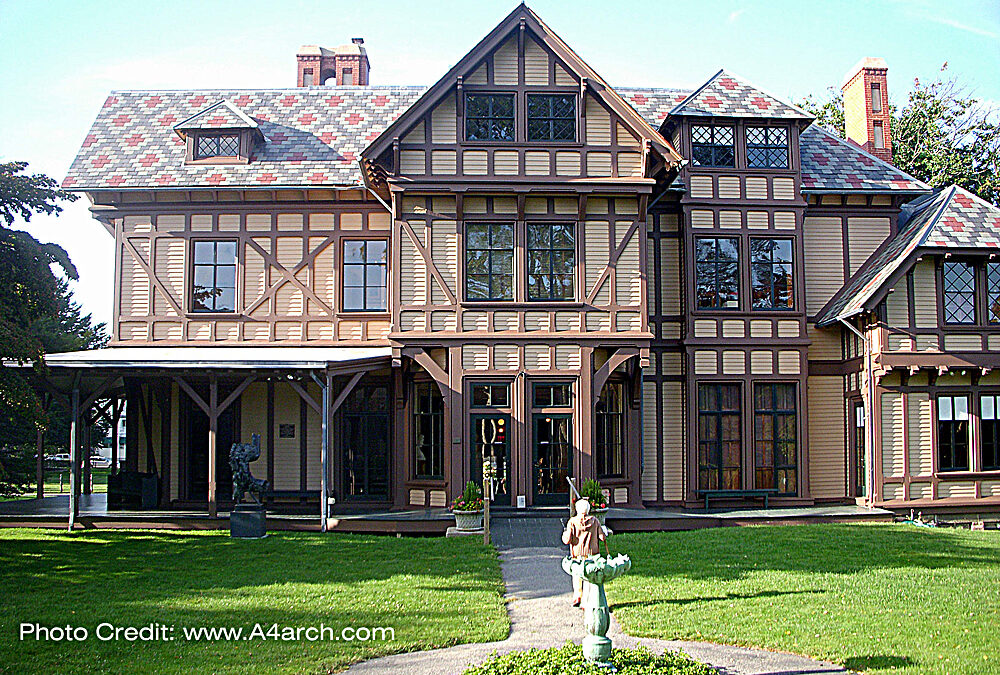 Newport is the repository of many treasures of American architectural history, including the JNA Griswold House. It is noted for the many surviving colonial-era buildings but the true building boom began around 1850 as Newport became a summer escape for southern plantation owners and New Yorkers, Philadelphians, and Bostonians escaping the summer heat in a time before air conditioning. This time was the start of what became known as “The Gilded Age” — a term coined by Mark Twain to describe the period of industrialization and newfound wealth (albeit for a very small segment of the entire American populace) that was reflected in a flowering of architectural design.

Between 1850 and 1900 there was probably no more famous or well-respected architect in America than Richard Morris Hunt. He was the first American-born student of the famous Ecole des Beaux-Arts in Paris and was so instrumental in bringing the European style of studio education to the United States that he became known as “Dean of American Architects.” Hunt summered and worked extensively in Newport and was eventually buried here. One of his early career works and one that prefigured in the organization and design of many later projects was the JNA Griswold House, which is celebrating its 150th anniversary of construction this year.

The house was originally built for John Griswold, an heir to a China Trade fortune and someone that Hunt met through his well-born wife Catherine Howland. Hunt met the Griswolds while traveling in Europe and the sketches for the house were begun before all of the parties had returned to the United States. The original hand-drawn plan and elevation sketches for the house show a larger and more elaborately styled structure than the one that was eventually built. These sketches are currently on loan from the Library of Congress and are part of the exhibition “Very Simple Charm: The Early Work and Life of Richard Morris Hunt, 1858-1878” which closes on September 16th. This exhibition is a lovely collection of works not only by Hunt himself but by his famous artist brother William Morris Hunt and other contemporaries, intellectuals, and artists that made Newport a hotbed of creativity and inspiration at the time.

The Griswold House, now the Newport Art Museum, is a model of what architectural historian Vincent Scully coined “The Stick Style” to describe the decorative half-timbering on the exterior of the building. This expressed skeleton both references the medieval French structures that Hunt knew from his travels in Europe but also became the vehicle for a new and novel design that was much more than pure emulation or derivation. Many point to Hunt’s early career as the most creative and important part of his legacy, eclipsing even his late-career work on the enormous mansions like Marble House and The Breakers, in terms of originality and creativity. The Griswold House has been fortunate in that it has only had two owners in its long life: the Griswold family from 1864 to 1916 and the Newport Art Association (now called the Newport Art Museum) from then until the present. The building was listed on the National Register of Historic Landmarks, the highest designation available for a built structure, in 2000.

If the imminent closing of the exhibition were not enough to get you over to the Art Museum, this weekend the organization is hosting its annual “Wet Paint” fundraiser, exhibition, and auction. Hundreds of artists, both from Newport and around New England, will descend upon Newport to create paintings and other artworks the day of Saturday, August 16. The works will then be mounted for display in the Ilgenfritz Gallery at the Museum and people will be allowed to place silent bids on the works to benefit the museum. While most of the works will sell that evening, the 50 or so most popular works by price and number of bids will be moved into the live auction held on Sunday under a tent on the grounds between the Griswold House and the Cushing Gallery. The works will be sold to the highest bidder in a lively and fun auction which has become an important fundraiser for the institution over the years and a great way for people to acquire original art at a very reasonable price. This year, in the shadow of the JNA Griswold House in its 150th year, it is hoped that the weather is beautiful, the artworks numerous and wonderful and the auction both fun and spirited!

Ross Sinclair Cann, AIA, LEED AP, holds degrees from Yale, Cambridge, and Columbia and is a historian, educator, and practicing architect living and working in Newport. His firm, A4 Architecture, is one of the many sponsors of Wet Paint.