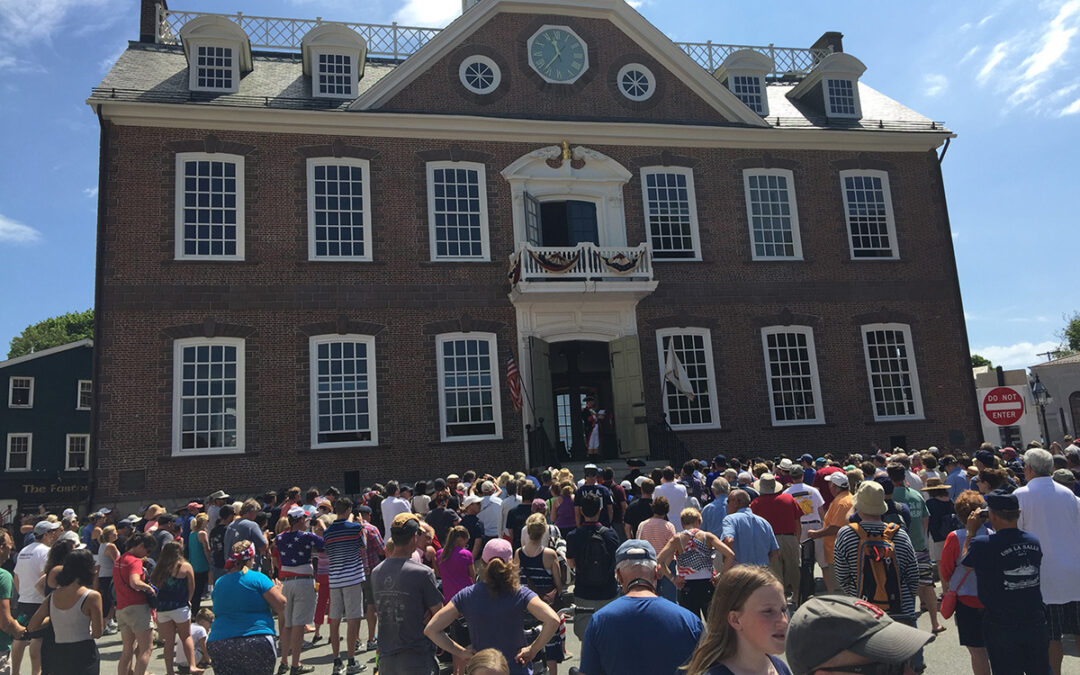 Newport is a place of authentic architectural monuments and living history. The houses of the Point and Historic Hill have been in many cases occupied for as long as 250-300 years. That means that potentially 50-60 generations of people have lived, raised their children and then passed the building to the children so they could raise their grandchildren under that same roof.

On the civic level there are also buildings that have been steadfast landmarks of the Newport community from long before America was separate from England. The original town common, which was once named Queen Anne Square, but which is now known as Washington Square, is one such place. At the top of the hill, immediately next to the spring that gave first life to the settlement of Newport in 1639, sits the Old Colony House. This structure was among seven seats of government distributed around the colony of Rhode Island so that each of the early communities felt they had a part in the governing of the state. The legislators would travel on a cycle and do business in each for a period of time before moving on to the next. 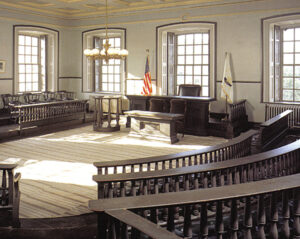 The building was designed in 1739 by Richard Munday, who was a shipbuilder and housewright. Born c.1685, Munday is credited with bringing the style and philosophy of Sir Christopher Wren from London to the American Colonies and applying that grand style to the architecture of the early colonial seaport of Newport. He is often considered to be the most noteworthy and prominent Architect-Builders in Newport during the Colonial era.

Unlike the vast majority of structures in Newport during the Colonial era, which were built of cedar shake or clapboard, the Colony House was built out of brick that had to be imported to the city at great expense. This choice of material trumpeted both the civic importance of the building and to the longevity that the building was designed to have. The structure displays a mix of Baroque and mid-Georgian influences. The brick structure, with its rustic quoins, proclaim the building’s self-importance and grandeur in a time when the vast majority of Newport buildings were wood clapboard. The railing and dormers however give the building a Georgian residential feeling that probably made the Colony house feel right at home with the many Georgian houses that were being built in the area at the time. The broken pediment looks like a grand entrance door that had been elevated high above the Parade which it overlooked.

The legislature room with its curved seating facing a central table and desk is intake from its early use and served as the perfect period setting for the court scenes of the powerful Spielberg movie “Amistad,” and indeed Washington Square where the Colony House is situated was transformed into the Colonial setting of New Haven, Connecticut (where the original trial took place) as it was the most intact Colonial setting in America that the film makers could find at that time.

The second level meeting room holds a priceless, larger than life, 18th century portrait of George Washington by Rhode Island master portraitist Gilbert Stuart. The legislature room with its curved seating facing a central table and desk is intake from its early use and served as the perfect period setting for the court scenes of the powerful Spielberg movie “Amistad,” and indeed Washington Square where the Colony House is situated was transformed into the Colonial setting of New Haven, Connecticut (where the original trial actually took place) as it was the most intact Colonial setting in America that the film makers could find at that time.

The Colony House was an innovative and original building that served as a functional and active seat for the Rhode Island government, until 1901 when the operation of the Legislature moved into the newly constructed McKim, Mead & White building in Providence on a full time basis. The Colony House is a central monument to the evolution of Architecture in America and it was made into a National Historic Landmark on Oct. 9th, 1960, among the first structures in the United States to receive the highest designation that is bestowed upon structure by the Secretary of the Interior. 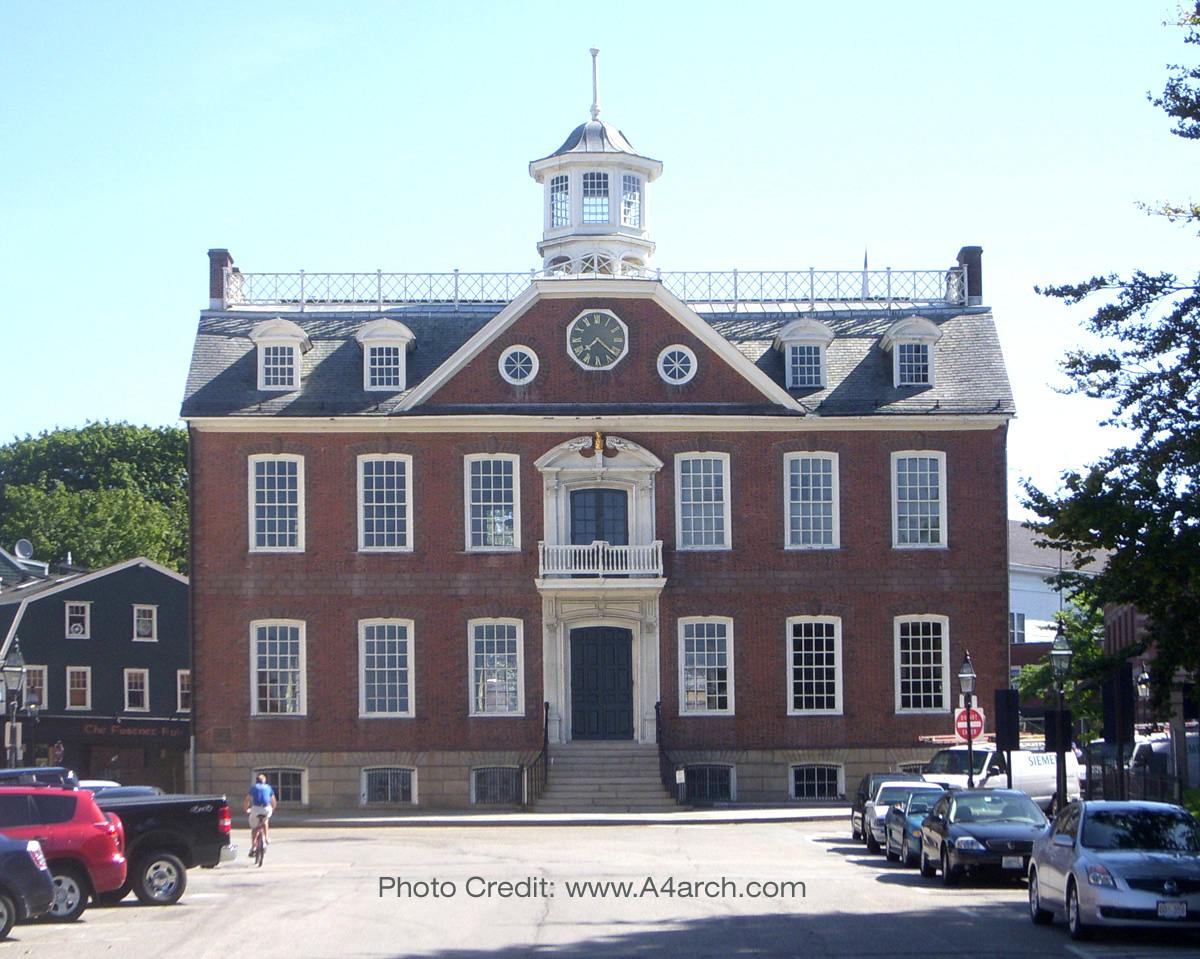 To commemorate the bravery and of the early Revolutionaries, the Rhode Island Sons of the American Revolution, made up of descendants of those who fought for the cause of independence, now read the Declaration of Independence at 11am each July the Fourth from the same place it was first read to the citizens of Newport back on July 22, 1776. The current reader is Captain Roy Lauth, who as a member of the Newport Artillery Company is therefore able to read the Declaration in his colonial era uniform. It is truly something very stirring to hear the words of that declared independence from Europe and the British Crown from the same location they were originally read so very long ago. After the reading there is a firing of the canons originally made for the Artillery Company by none other than Paul Revere in a 21 gun salute. Like so many places in and around Newport, this event allows one to get the feeling of stepping through a portal in time back to an earlier era since the surrounding architecture is still perfectly intact. It is worth the time and effort to experience firsthand.

Looking to design or remodel your building to its fullest potential? We can help so let’s discuss your ideas.