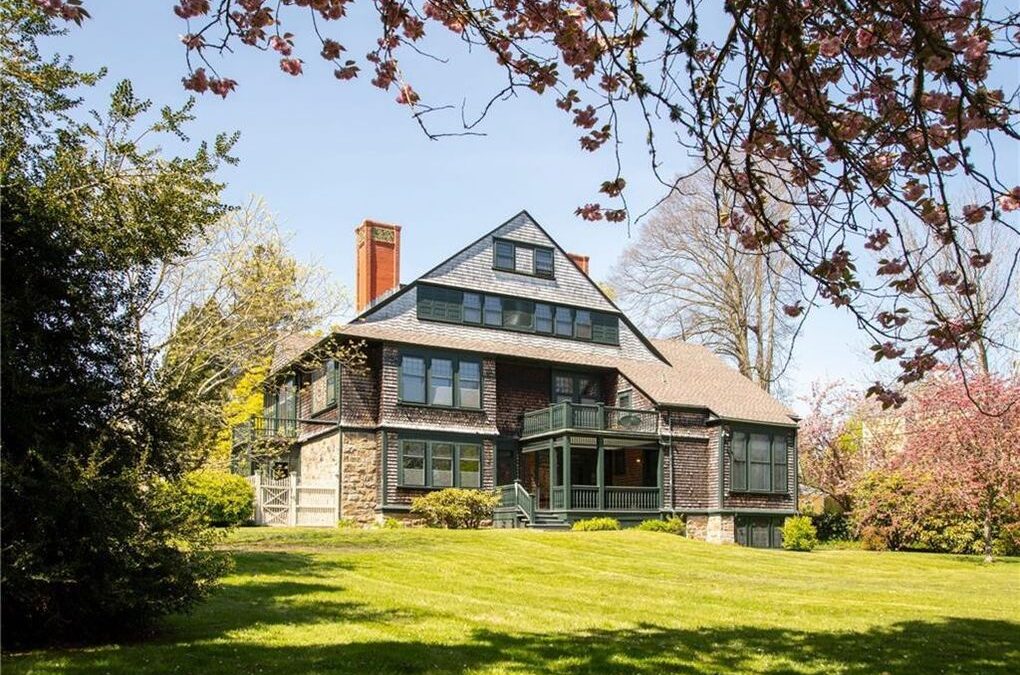 The architectural firm McKim, Mead, and White, by the turn of the twentieth century would be the largest, most prolific, and most impactful practice in the world.  But just twenty years earlier, in 1880, they were a brand new partnership.  The firm of McKim, Mead, and Bigelow founded in 1877 had just broken up when McKim divorced the sister of his former classmate and partner William Bigelow.  In his place, the firm engaged a young designer Stanford White, who was working in the office of H.H. Richardson which was down the hall in the building where the partnership was operating at the time.

The first commission was an important one: The Newport Casino Club for New York media tycoon James Gordon Bennett Jr.  The Newport Casino’s colorful origins have been described in detail in previous Archi-TEXT articles, so we will not rehash those here.  However, two points are worth noting:  First, the project was a triumph and was the center of social life in Newport when it opened July 1, 1880;  Second, the building is often identified as the subtle point where the Queen Anne Revival style evolved into what Yale architectural historian Vincent Scully Jr. named “The Shingle Style.”

In retrospect, what is noteworthy about the Shingle Style is that unlike so many American architectural styles that came before it, this architectural style was quintessentially American.  Scully poetically described the style as “The Architecture of the American Summer.”  It was a style that evolved from the far fussier and backwards looking Queen Anne Revival style that was emulative of a seventeenth century English domestic architectural style.  This style had found favor in the United States and elsewhere in the economic expansion that occurred following the conclusion of the American Civil War.

The Shingle Style was marked by a more painterly use of shingle patterns covering the free flowing and asymmetric masses of balloon frame construction that were typical of the period.  In the capable hands of McKim, Mead, and White, as well as other talented architects of the Gilded Age (including Peabody & Sterns, Bruce Price, and many others), the style achieved both an elegance and an informality that captures the essence of that era remarkably.  It was the rise of a leisure class, confident in their own capabilities and aesthetics, that finally freed them from European convention (at least for a while).

McKim, Mead, and White went on to design many houses in Newport, both in the Shingle Style and the more elaborate neoclassical styles that followed the popularity of that style.  Great concentrations of these buildings were built in the Catherine-Kay neighborhood that was being created in the period from 1880 to 1900.  These houses, all within easy walking distance of one another, form a visual timeline of the evolution and passing of the first wave of Shingle Style houses in resort enclaves like Newport, Maine, the North Shore of Boston, and other similar communities in New England.  Here are descriptions of these six extant structures and a brief outline of their histories: 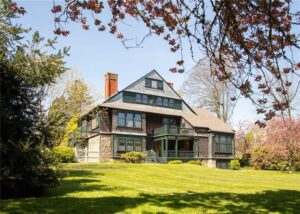 The Samuel Tilton House was designed by McKim, Mead, and White between 1880 and 1882, and is located on 12 Sunnyside Place in the Catherine-Kay Neighborhood of Newport.  This house is notable for its creativity regarding its surface ornament, rather than its building form.  The exterior is covered in a variety of materials and patterns from the bottom to the top.  One example of this can be seen on the northern and western façades, in which shells, rocks, colored glass, and coal were embedded into decorative stucco panels to create unique moments of light.  Although the façade from the street is short in length, the northern and southern façades takes up the entirety of the lot width, allowing for plenty of windows and porches facing the southern lawn.  This house served as a model for the firm’s other designs for additional smaller projects in the area, especially along Red Cross Avenue.  Additionally, the interior rooms of this house are well preserved and display influences from American colonial, Japanese, and Indian cultures. 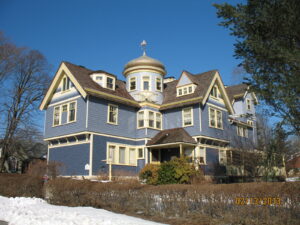 The Katherine Prescott Wormeley House was designed by Charles Follen McKim in 1876, and then revisited by McKim, Mead, and White 1882.  It is located on 2 Red Cross Avenue in the Catherine-Kay Neighborhood of Newport.  This house was designed for Katherine Prescott Wormeley, who was an author and translator from Boston, as a summer home.  It was designed in the form of a two-family residence, with one facing southwest toward Red Cross Avenue, and the other opening out at the opposite end onto Sears Court.  The building itself is comprised of two intersecting blocks with a three-story tower “inserted like a hinge pin” at their intersection.  This building is one of the earliest designed buildings by McKim, Mead, and White that is still standing.  Furthermore, it serves a historical example of the origins of Red Cross Avenue and the earliest version of the cottage style seen in Newport at this time.  David Sears, who owned the large gentleman’s farm-estate, divided Red Cross Avenue into smaller lots.  His Gothic Revival house, the Red Cross Cottage, and the Katherine Wormeley House, still remain along the avenue and speak to the architectural process and styles of that time. 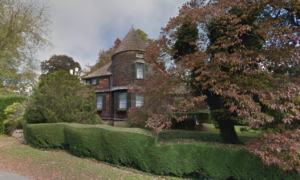 “Villino”, also known as the Francis Skinner House was designed by McKim, Mead, and White between 1881 and 1882, and is located on 6 Red Cross Avenue in the Catherine-Kay Neighborhood of Newport.  This house was designed for Francis Skinner, a woman from Boston, and is the smallest shingled cottage designed by the architects’ in Newport.  On the exterior, this house is notable for its large tower on the corner with an entrance porch and tall brick chimney immediately adjacent.  Also, there is a reflection of seventeenth-century architecture which can be seen in the design of the high gable spills around the tower and chimney and over the porch.  Lastly, the dormer, which can be seen behind the chimney, and the line of casement windows, are stylistic choices that set this cottage design apart.  At the interior, there is an open plan around a hearth core, very similar to other designs from these architects in other projects. 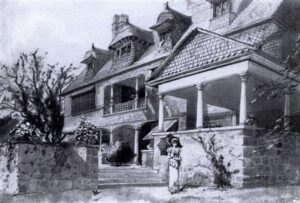 The “Whileaway” or the “Boxcroft”, also known as the Samuel Coleman House, was designed by McKim, Mead, and White between 1882 and 1883, and is located on 7 Red Cross Avenue in the Catherine-Kay Neighborhood of Newport.  This house was designed for Samuel Coleman, a known watercolorist and oriental art collector, as his summer house and studio.  On the exterior, the house is opened up with windows, bays and porches, and has a veranda below and balcony above to overlook the rest of the property.  There is also a gambrel roof that shelters the shingled top two stories, which visually references some of the large houses along the Newport waterfront.  The firm experimented with early American Colonial forms in their design, and this house helped to set the tone for other designs within the Catherine-Kay neighborhood and shingle style architecture within Newport and the rest of New England. 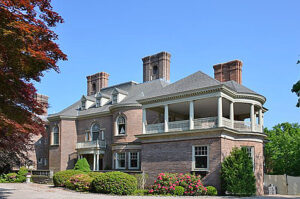 The Commodore William Edgar House was designed by McKim, Mead, and White between 1884 and 1886, and is located on 25 Old Beach Road in the Catherine-Kay Neighborhood of Newport.  During the time of the building’s conception, the architects were beginning to shift from the “shingled picturesqueness” of their previous designs to the formality that the firm is widely known for, American Colonial Revival.  In terms of American Colonial Revival, this house displays a central Palladian window, symmetrical elements, etc. which reflects eighteenth-century American architecture.  However, there are still elements of asymmetry that can be seen, similar to the previous projects completed by the firm.

The “Oakwood”, also known as the George Gordon King House was designed by McKim, Mead, and White in 1902, and is located across 1-3 Oakwood Terrace in the Catherine-Kay Neighborhood of Newport.  This house was built for a local philanthropist, George Gordon King.  The house is a large, elongated two-and-one-half-story structure with a gambrel roof.  The architecture designed by the firm is interesting due to its “Pebble Dash” walls, which are unusual for a typical home in the Newport area.  Most notably, it has an off-center main entrance which is elaborately ornamented, with two-story Corinthian columns which support a pedimented gable and a blind balustrade on smaller Ionic capitals.

Less than 20 years after it first flowered, the Shingle Style was now almost completely overshadowed by more classical European inspired designs in the work of McKim, Mead & White. However the Shingle Style, which began in the Eastern resort communities like the Catherine-Kay neighborhood was conveyed through architectural magazines to every corner of the country, where local architects adopted and explored the form including such notables as Frank Lloyd Wright. The inexpensive materials, informality and asymmetry of the style and its American character made it a style that became both widely popularized and long-lived. In fact, the Shingle Style was adopted by the modernists (like Charles Gwathmey and Steven Holl) and post-modernists (like Charles Moore and Robert AM Stern) in the late twentieth century and the modernized version of the Shingle Style remains highly popular today.