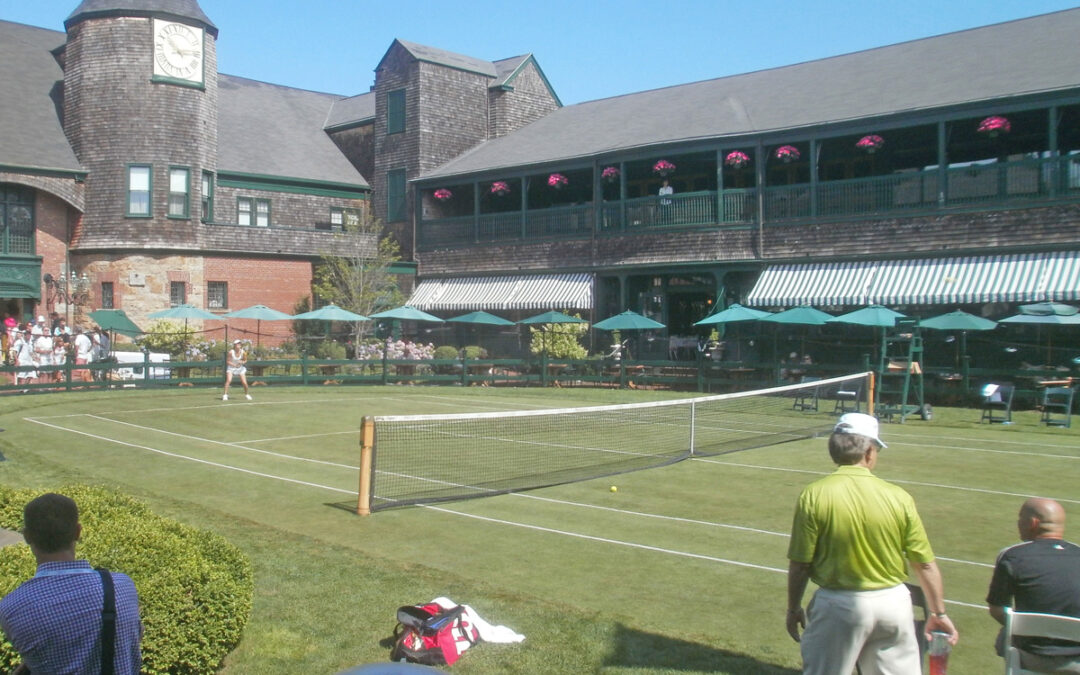 When the Newport Casino was first built in 1880, the game of lawn tennis was a new but quickly growing sport. The game had been derived from the more complicated and architecturally involved game now known as Real Tennis, which had been invented in the 13th century in France. To make the sport of “tennis” more accessible and affordable to all, Major Walter Wingdale took the essentials of the game of hitting a ball over a net with wooden racquets and was granted a patent for his new variation of the sport by Queen Victoria in 1874. The first tennis tournament Championships were held at the Wimbledon Croquet Club in London in 1877 and just four years later the first American Championships was held at the newly constructed Newport Casino. 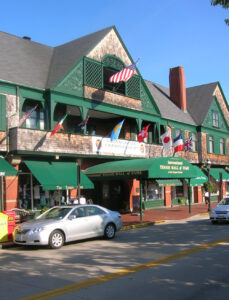 The Newport Casino was commissioned in 1879 by James Gordon Bennett, who owned an estate on the site where the Bellevue Garden shopping complex now stands. He reportedly founded the club after fellow members of the Reading Room Club objected to his polo instructor riding up the staircase to the second floor of the building on a bet with Bennett. Bennett was an eccentric millionaire publisher of the New York Herald and was famous for doing exactly as he liked. He reputedly said he created the club so that people could “have a bit of fun” implying that had not actually been permitted in Newport previously. After a lightning fast six-month design process, construction on the Newport Casino broke ground on January 8, 1880 and through the efforts of 200-300 construction laborers, the facility was opened to patron in July of 1880, barely six months later.

Bennett selected the newly remade firm of McKim Mead & White to undertake the design work. Charles Follen McKim and William Rutherford Mead had worked together for several years but had had a falling out with their former partner William Bigelow. To provide additional design and drafting talent they lured a young, self-taught Stanford White from the office of H.H. Richardson, which was located in the same building as their studios. With the addition of this new design talent the new firm successfully completed the design work for the Newport Casino and began its rapid ascent. The Newport Casino project was widely published as Newport was a place closely followed in both the social and architectural press during that time.

Charles Follen McKim was an early product of the French design tradition in the United States, having followed Richard Morris Hunt as the second American to study at the prestigious École des Beaux Arts in Paris.  Although McKim and his partner, William Rutherford Mead, had enjoyed some success with another partner, William Bigelow, it was after Bigelow was replaced with the flamboyant but talented designer Stanford White that the partnership truly gathered steam. 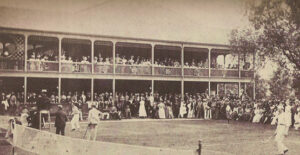 Located at 194 Bellevue Avenue, the Casino building is a masterpiece of the “Shingle Style,” which was popular during the 1880’s. The Shingle Style, which was named by Yale Architectural Scholar Vincent Scully in his 1955 seminal work The Stick Style and the Shingle Style. The style, as Scully defined it, was a refined and simplified version of the earlier Queen Anne Revival formula, which was marked by more polychromy and half timbering. The Shingle Style used cedar shingles cut in various patterns to create an almost painterly to cloak it asymmetric and free formed volumes, this giving it its name naturally and succinctly. Although derived from a style which was the revival of a still older style the beauty of the Shingle Style is its informal inventiveness and easy flexibility to a wide variety of structures, from small scale residential buildings to larger scale New England resort hotels. Scully astutely called the Shingle Style “The architecture of the American Summer” as the form quickly spread from New England to all the corners of the United States, but most especially its resort and vacation communities.

The Casino shares many stylistic details with the Isaac Bell House (also designed by the partnership in 1882), which is located further down Bellevue Avenue and made available for visitation by the Preservation Society of Newport County. Among the many shared features include intricately cut cedar shingles, rounded towers, encircling covered porches and a loose asymmetric composition of masses arranged to suit each site. A particularly interesting feature of the Casino is the mix of stone, brick and shingle at the interior “Horseshoe Courtyard.” This eclectic mix of material gave the building the look of a structure built over many years through addition to older structures and gave the club the sense of an imaginary heritage and history. 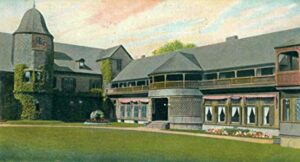 The Casino (meaning “little house” and not “place of gambling” in those days) represented a new sort of leisure facility with dining, sporting and other facilities under one roof—what would later become known as the “country club.” This magnificent complex is more or less intact thanks to the vision (and generosity) of summer Newporters James and Candace Van Alen, who saved the site from becoming a strip shopping center in 1954 by inventing a new use for the facility—the Lawn Tennis Hall of Fame.  In 1973, induction into the institution was widened to include international players and in 1976 it was renamed the International Tennis Hall of Fame (ITHOF). This grand building is now home to one of the central collections of tennis history and memorabilia in the world, including the original patent, signed by Queen Victoria, for the invention of lawn tennis. The ITHOF is home to the only professional lawn tennis tournament played in the United States, and has seen participation by many of the top players in recent years. The Hall of Fame Championships are always held the week immediately following Wimbledon and are the only professional tournament played in North America on the grass surface. The Saturday of the tournament is also the occasion for election and inducting new members into the International Tennis Hall of Fame, the highest award a tennis player can achieve in their lifetime. This year former world #1 Leighton Hewitt will be inducted, and the first modern champion at the Hall of Fame Tournament to achieve this honor.

For its importance in the career of McKim, Mead and White, in the development of the American Shingle Style and in the invention of the “country club”, the Casino complex was designated a National Historic Landmark in 1987. It is a place which from its earliest day to the present has been associated with tennis in America and now, through the Hall of fame located there, with the greatest players from around the world. 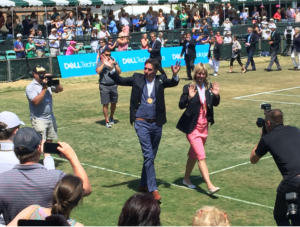 Looking to design or remodel your building to its fullest potential? We can help so let’s discuss your ideas.

Ross Sinclair Cann, AIA is an, historian, educator and practicing architect living and working in Newport. He is the Founding Principal of A4 Architecture and the former President of the National Tennis Club located at the Newport Casino. He holds architecture degrees from Yale, Cambridge and Columbia Universities.