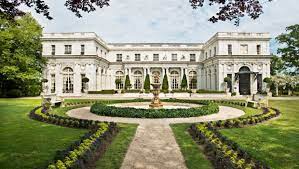 Newport is famous for its grand buildings, many of which are both extravagant and unique. Many of the grand mansions on Bellevue Avenue in particular were created more for entertaining than for living as some of these grand “summer cottages” were used for only 6-8 weeks each and were closed up the rest of the time. Some of these properties have become part of The Preservation Society and continue to serve as showcases for design and architecture. One such mansion that will be particularly in the spotlight this coming week is Rosecliff, which is the setting for the Newport Flower Show scheduled for June 21st, 22nd, and 23rd.

This flower should, first begun in 1996 by Mrs. Samuel Hamilton, a noted gardener and Newport summer resident from Philadelphia, has blossomed over the years into a large regional show that is recognized nationwide for its beauty and excellence. Organized by a series of capable chairwomen over the years, the show is run under the auspices of the Garden Club of America which is celebrating its 100th anniversary this year. This year’s Chairwomen, Patricia Hamilton Fernandez, Candace Morgenstern, and Jocelyn Sherman have named this year’s show “Jade-Eastern Obsessions” and it will naturally have a strong oriental influence. Among the many things the Newport Flower Show has become known for, perhaps the greatest and most consistent features of the shower is its magnificent setting, Rosecliff.

Rosecliff was designed in 1900 by Standford White of the noted firm of McKim, Mead, and White for the Oelrichs Family. “Tessie” Oelrichs was heir to the Comstock Silver fortune and every effort and expense was undertaken to make the house a magnificent example of the Classical Revival style. The model for the building is the Petit Trianon garden pavilion at the Versailles Palace in France. As befits its exterior style, the interior was fabricated in a lavish French Ancien Régime style by the Parisian firm Allard et Fils.

The building is a model of the great houses that were constructed during the “Gilded Age” for the purpose of lavishly entertaining during a short summer season when the houses were occupied each year by their wealthy owners. In previous “Archi-TEXT” articles, it has been described how some houses along Bellevue (like Kingscote and Beechwood) had ballrooms added to them long after there were originally constructed. In the case of Rosecliff, the ballroom was central to the design and basically is the house. It dominates the central part of the building’s H-shaped plan, with the other public spaces arrayed at either end. It is in the grand ballroom that the lavish flower arrangement display and judging occurs. In contrast, the family bedrooms are laid out in an almost hotel-like way off a long, central hall on the second floor and the rooms are surprisingly modest in feeling – particularly in comparison to the grandeur and soaring height of the central ballroom.

The ballroom is the grand living space that links all the other rooms on the ground floor together. It opens to a garden terrace enclosed by the two wings at the front of the house and opens to a covered back terrace overlooking the magnificent fountain and lawn and the water beyond. It is on the back terrace where the horticulture displays are organized. During the flower show, the sweeping lawn down to the sea is transformed into a neatly arranged encampment of tents selling art, jewelry, clothing, and all sorts of gardening implements.

The grand houses of Newport are elegant year-round, but perhaps there is no better time to visit and see them than when they are being put to their original purpose: welcoming guests and being used as the stages for elaborate and lavish entertainment. The Newport Flower Show is the perfect time to visit Rosecliff and see this beautiful building put to spectacular use!

Ross Sinclair Cann, AIA LEED AP is a historian, educator, and practicing architect living and working in Newport. This article was initially published in ARCHI-TEXT, in Newport This Week, June 20, 2013.