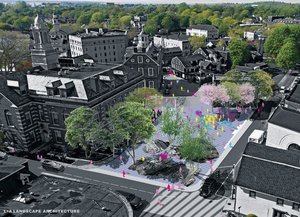 A rendering by L + A Landscape Architecture shows the new public space that would be created from the Florence K. Murray Judicial Complex, at the left side of the image through to Spring Street.

The preliminary design for the Newport Historic Spring Project was presented to the public on July 18 at the Edward King House. This is another step toward the transformation of this central area of Newport, near Washington Square, into an urban public space.

This process began in 2012 when the owner of the gas station that formerly operated on the site announced that he was interested in selling. A Community Charrette was organized by the Newport Architectural Forum to gather information about what citizens of Newport would like to see the site and the surrounding area become in the future.

This area is part of the “Town Square” at the heart of the city and is where people gather for parades and public events. For more than 350 years, Newport’s town square has actually been a triangle where Broadway from the north meets Touro Street heading up the hill, creating a long sliver of land called Washington Square. For many years this was known as the “Parade,” because the street was wide and it was where great processions were staged and visiting dignitaries were welcomed in grand style. The gas station was once connected to it before the construction of the courthouse. Now, pieces of this area are coming back together because of the hard work of many dedicated citizens and organizations.

The creation of a new public space on the site of the original town spring is underway. The Newport spring, which gave name to “Spring Street,” was the source of freshwater that made the original settlement of 1639 desirable and possible. Under the leadership of the Newport Spring Leadership Committee, chaired by Lilly Dick, the site was purchased in 2015, the soil that was contaminated through its use as a gas station was cleared and the old gas tanks were removed. A traffic study was conducted last year to evaluate the existing roadway volumes and computer model various alternatives.

In December 2017, a large underground stone structure was found at the site. Following exploration of the structure by international experts, it was determined that the structure was the “spring box” where spring water was collected prior to being pulled by buckets or diverted by wooden pipes for use at other locations. The structure was thoroughly documented by precise computer measurement and 360-degree photography.

A number of teams applied to redesign the site, and L + A Landscape Architecture of Newport was selected to create a conceptual level, using the underlying principles that the client group had established as its core design goals: preservation of the unique historical significance of the site; an open space guarantee that provides opportunities for public access and civic enjoyment in perpetuity; traffic and pedestrian circulation and safety improvements; and a sustainable, community-based design that will foster cultural and economic vitality.

Before more than 80 community members at the Edward King House, the design team presented plans and computer renderings of its conceptual designs. The main element of the design is to close Court House Street and reconnect the former gas station site to the park. This will shorten the pedestrian crossing distance from 90 to 18 feet, according to landscape designer Tanya Kelley. Seating areas for protection of the site and water features as a reminder of the site’s important history were other important elements.

The group is working with the city and with those who are opposed to the design to iron out any differences. The current design proposed that traffic will be directed down Stone Street and then Broadway on its way back to Farewell Street. Proper signage will help those exiting Newport to use Memorial Boulevard toward Boston, and America’s Cup Avenue toward the Newport Bridge, channeling traffic from the Colonial-scaled streets in the middle of the city.

If you were unable to attend the presentation at the Edward King House last week, which ended in a round of applause, visit historicnewportspring.org. There now is a link to submit suggestions and comments, and an electronic copy of the traffic study that was conducted by BETA Group, prior to the initiation of design.