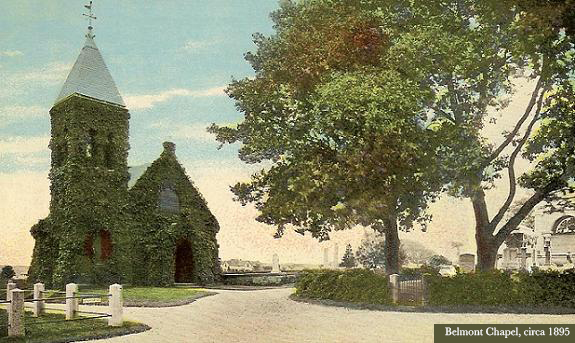 The Belmont Chapel, located in Newport’s Island Cemetery, was built in 1886 by Mr. and Mrs. August Belmont, Sr., as a tribute to their beloved daughter Jane, who died at the age of nineteen. The Chapel was designed in the Gothic style by father-son architect duo George C. Mason & Son during the Gilded Age. In constructing the Chapel, wood was not used in any parts of the building except for the roof, domes, and staff heads holding the window sashes. The exterior is made from a rich, warm, reddish-brown sandstone. Soon after its completion in March of 1888, the Belmonts donated the Chapel to the cemetery for public use in non-denominational services. Ten years after the Chapel was constructed, architect Richard Morris Hunt added improvements to the interior to combat the dampness, adding an interior wall to allow air circulation for a new heating system.

The Chapel remained in occasional use for funerals and various other services until World War II, but by the 1960s it had fallen into a derelict state. A heavy overgrowth of ivy as early as 1900 progressively combined with loads of wisteria to bury the Chapel beneath a layer of foliage. In recent decades, the deteriorating roof exposed multiple locations within the church to the open sky, which allowed rain and snow to wreak havoc on the interior and furnishings. The Chapel was neglected for over one hundred years, but the building is now undergoing a major restoration that began when several individuals uncovered the forgotten Chapel in 2016 and pledged to try to restore it. 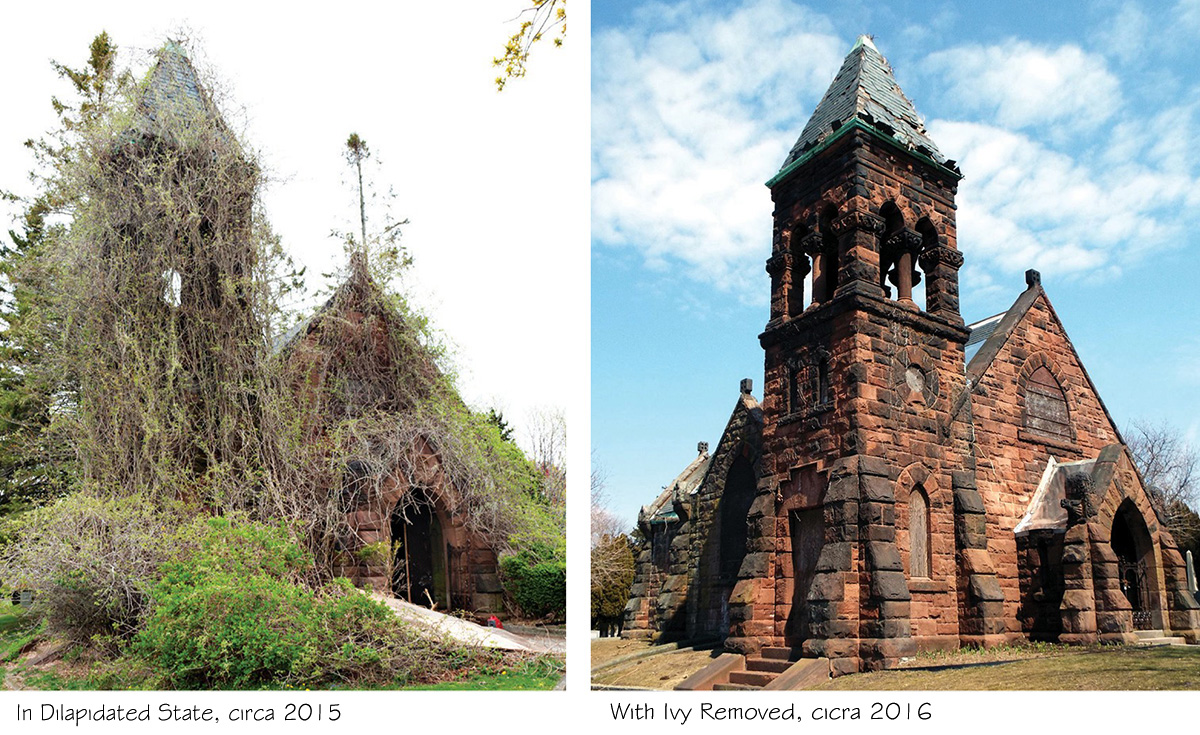 Because the Chapel was engulfed in ivy, its structural elements were in danger of collapsing, so in 2019 the Belmont Chapel Foundation embarked on a mission to completely restore the Chapel. On August 18th, 2022, the Belmont Chapel Foundation hosted an open house showing the progress of the completed stage of phase I (which was the construction of a new roof and completion of adding slate shingles to the roof). Phase II has already begun and will include re-plastering the interior walls, ornamental woodwork in the chancel, repairing missing sections of floor tile, repairing window and door frames, installing tempered storm glass for windows, repairing stained glass windows, analyzing decorative paint and plaster, HVAC, and alarm and emergency lighting. The finish work of repainting the interior walls, restoration of the wooden pews, and installation of decorative lighting will be done in Phase III.

Nine of the windows were designed by painter Luc-Oliver Merson and executed by Eugene Oudinot and his successor Felix Gaudin in their studios in Paris. Fortunately records of the original designs still exist and are being utilized to restore them to their original beauty. The tenth window (a depiction of St Elizabeth of Hungary) was designed and executed by Tiffany’s in New York, whose family was related to the Belmont family through marriage. Two of the windows were completely destroyed by vandals many years ago and will have to be totally reconstructed. 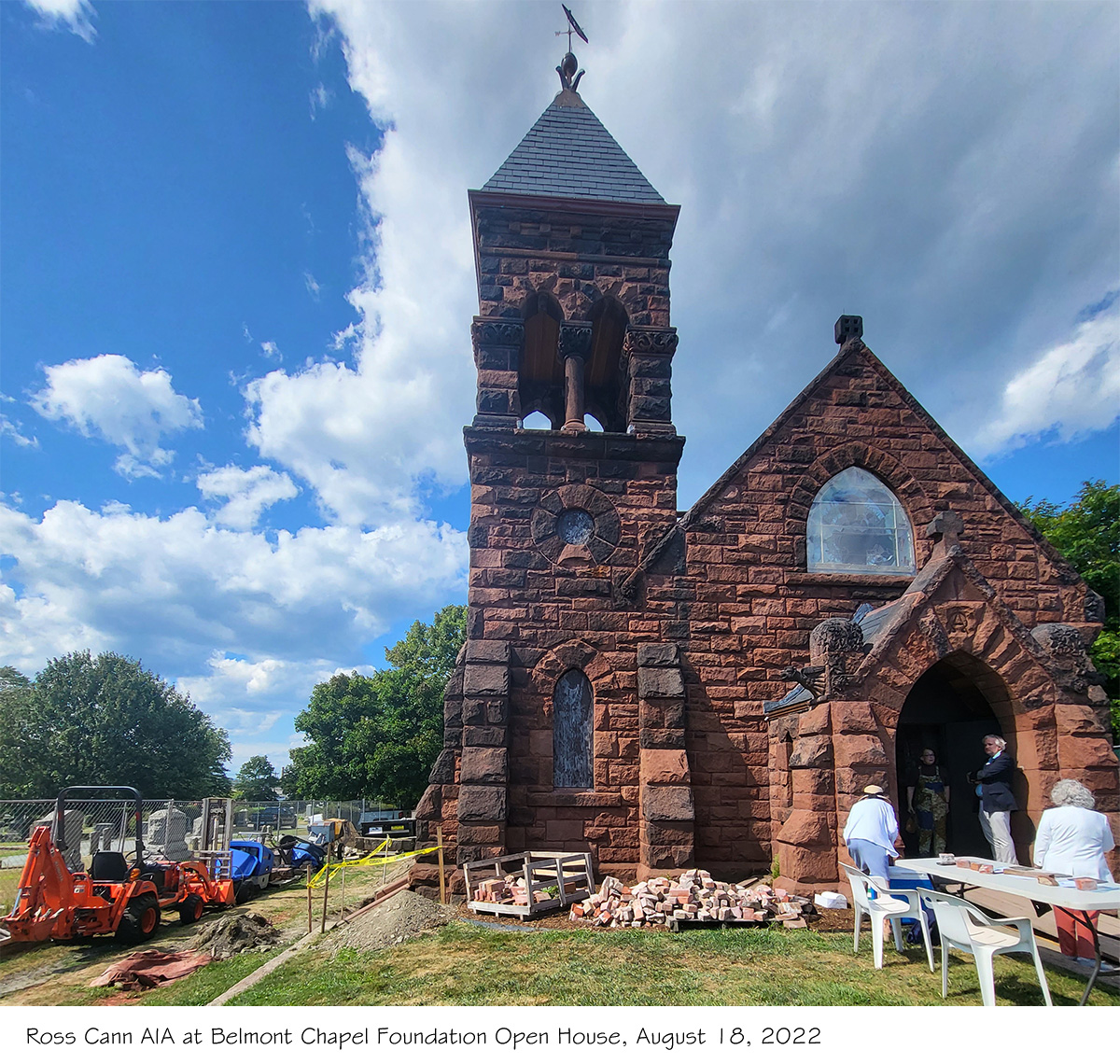 Both George Champlin Mason Sr. and Richard Morris Hunt are now buried near the Belmont Chapel, which is now well on its way to being rebuilt under the careful construction management of The Damon Company. Cemeteries, like the Island Cemetery in Newport, were once the original parks of America and were frequented by picnickers and relatives tending the graves and leaving flowers for passed loved ones. It is wonderful that, through the efforts of the Belmont Chapel foundation, this tradition of intergenerational care is being restored.