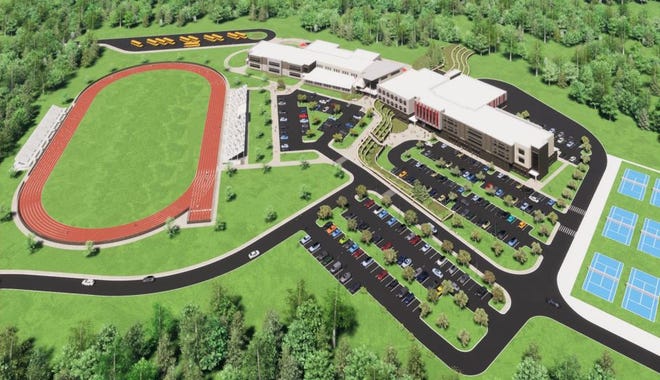 Of the school buildings in Newport, the current Rogers High School is the most recognizable, and also the third building to carry this name. The first was built on Church Street in 1873. The second was built on Broadway in 1905 and is now part of the Thompson Middle School. The third was built on Wickham Road. With the passage of the Newport School bond proposal 78% to 22% the redesign process moves forward to create the fourth William Rogers School building.

This bond bundled two projects: the replacement of the Rogers High School built as part of the 1950’s school building boom, which sought to educate the children of all the service men who returned from the war, moved to the newly constructed suburbs and began having families. Rogers High School is among the few “International Style” buildings in Newport and is marked by the characteristic rectangular composition of brick and glass curtain walls and flat roofs. These school buildings, which are prevalent around the country, are now between 60 and 70 years old. Roofing insulation and many other building technologies have advanced tremendously since the time they were built.

Schools in general have taken a different place in society as well. No longer just places to educate the young, schools have taken on the role of community centers and gathering places for public presentations in the evening and weekends.

Over time, Newport has seen the de-acquisition and renovation of a number of elementary schools around Newport, including the Cranston Calvert, Coggeshall  Callender, and Corey schools have all become residence condominiums over the years.

The last twenty years have also seen the modernization of the Thompson Middle School and the construction of the Pell Elementary School, the Met School and the CCRI Newport Campus in Newport’s North End where the majority of the city’s school age population now lives.  After many decades of falling population of school age children, the numbers have stabilized and actually started to increase, which is the impetus for the expansion of the Pell School to meet those new demands.

Prior to the election and bond referendum the debate was between the relocation of the high school to a new $101 million purpose built facility or the regionalization of the high school in concert with Middletown. Prior efforts to bring these two programs had met with opposition from both communities but most especially the Middletown council and school board. Opponents of the School Bond expressed a belief that the incoming board was more open to regionalization but supporters of the Bond stated that regionalization, even if possible, was a time consuming exercise without the guarantee of success whereas the need for a new high school facility was long past due.

The “New New” Rogers High School is to be a 164,000sf facility designed by Studio JAED, which specializes in such educational structures. Unlike the existing facility, which is broken into units connected by long corridors, the new building is to be a single long structure connected along a central spine of circulation with classrooms at either end of the line and shared facilities like the theatre and cafeteria in the middle. The design has been the byproduct of two community charrettes to give the design team input from students, parents and community members about what works best and is needed most.

One strong argument in favor of the Bond was a 53% match from the Rhode Island Department of Education (RIDE) if certain design criteria were met. Those criteria were certified in May 2020 and so the $53 million Bond can actually be used to finance the $101 million of construction and design that the new facilities are projected to cost.

With the approval of the bond, the work will now progress from concept design into Design Development. There are still many steps left until the fourth Rogers High School is built and open and the third one is torn down to make way for the sports field used to site the new structure. But with the enthusiastic passage of the $55 million Newport School bond referendum the process is one step closer to completion.