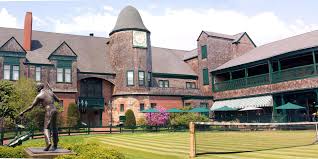 The firm of McKim Mead & White was certainly the most influential and prolific American architectural partnership of the late 19th century and early 20th century. Newport is the proud home of their very first project as the firm McKim Mead & White: the Newport Casino at 194 Bellevue Avenue.

Charles Follen McKim was an early proponent of the French design tradition in the United States, having followed Richard Morris Hunt as the second American graduate of the prestigious École des Beaux-Arts in Paris.  Although McKim and his partner, William Rutherford Mead, had enjoyed some success with another partner, William Bigelow, it was after Bigelow was replaced with the flamboyant but talented Stanford White that the partnership truly gathered steam. The extraordinary run of this firm might have gone longer but for the sensational murder of Stanford White at age 53 by a jealous husband on the roof of an elite New York club (of his own design) in 1906.

The Newport Casino was commissioned in 1879 by James Gordon Bennett, who owned an estate across the street on the site where the Bellevue Garden complex now stands. He reportedly founded the club after being ostracized by fellow members of the Reading Room Club after inducing his polo instructor to ride to the second floor of the complex on a bet. The Casino building is a masterpiece of the “Shingle Style” popular during the 1880s and shares many stylistic details with the Isaac Bell House (also designed by the partnership in 1882), which is available for visitation by the Preservation Society of Newport County and is located further down Bellevue Avenue. These shared features include intricately cut cedar shingles, rounded towers, encircling covered porches, and a loose asymmetric arrangement of masses made to suit each site. The Casino complex was designated a National Historic Landmark in 1987.

The Casino (meaning “little house” and not “place of gambling” in those days) represented a new sort of leisure facility with dining, sporting, and other facilities under one roof — what would later become known as the “country club.” This magnificent facility is more or less intact thanks to the vision (and generosity) of summer Newporters James and Candace Van Alen, who saved the complex from becoming a strip shopping center in 1954 by inventing a new use for the facility — the Lawn Tennis Hall of Fame. In 1973, induction into the facility was widened to include international players and in 1976 it was renamed the International Tennis Hall of Fame (ITHOF). This grand building is now home to one of the central collections of tennis history and memorabilia in the world, including the original patent, signed by Queen Victoria, for the invention of lawn tennis. The ITHOF is home to the only professional lawn tennis tournament played in the United States and has seen participation by many of the top players in recent years. The tournament (July 9-15) is also the occasion for inducting new members into the Hall of Fame and this year Pete Sampras is scheduled to join three others to enter the pantheon of tennis.

At the back of the complex, behind the rows of beautifully maintained lawn tennis courts, sit two freestanding buildings connected by a two-story porch. The northernmost of these two buildings house a theater, which will hopefully be returned to regular use sometime in the future through a partnership between the ITHOF and Salve Regina University. The southernmost building is home to the National Tennis Club, a facility dedicated to the sport of court tennis, which was the original racquet sport invented in the 14th century. This little-known facility was restored in 1980, on the occasion of the complex’s hundredth birthday, and has been inactive use ever since. In fact, the World Championships of the sport were held in Newport in 2004, the first time that championship had been held in the United States in 25 years. Court tennis is often known as the “Sport of Kings” since many of the crowned heads of England and France were active players. Unlike tennis, where there is only a single playing surface divided by a net, court tennis has 25 playable surfaces and closely resembles a medieval monastery courtyard, which was the inspiration for the playing court.

The existence of these magnificent buildings and lawns (and the realization that they could have been turned into parking lots) makes every architectural preservationist proud of the battles won, but mindful of the ever-present challenge of maintaining the best of the old while allowing for the creation of future landmarks and masterpieces.

Ross Sinclair Cann, AIA is a historian, educator, and practicing architect who lives in Newport. He is a LEED AP (Accredited Professional) and is a contributor to GrowSmart RI. This article was initially published in ARCHI-TEXT, in Newport This Week, June 3, 2007.