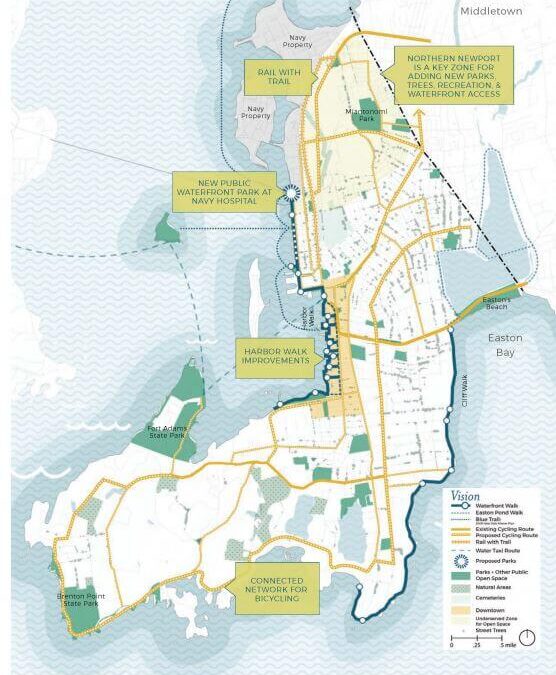 Newport is currently undergoing a design process for one of the most significant planning initiatives to occur since the construction of the Pell Bridge and the insertion of the America’s Cup Avenue through the city’s historic waterfront in the late 1960’s and early 1970’s. This effort has been stimulated by two primary factors: the imminent redesign of the Pell Bridge off-ramp and the sale of the former Newport Casino site to Carpionato Group in 2018 for redevelopment.

As longtime residents of Newport are well aware, the construction of the bridge, and the development of the tradesman center and casino on the site of the former city landfill effectively divided the city of Newport into two parts: the South End with its historic architecture, grand mansions, and many other tourist attractions; and the North End, which is where the Naval Station, large shopping malls, and much of the city’s affordable housing are located. To get from one part of the city to the other involved following a convoluted route of half constructed highways that never connected to the upper part of Aquidneck Island as was originally envisioned. Much has been done to revitalize the North End over the last 20 years including the reconstruction of the Section 8 housing through the Hope VI grant program, the Pell Elementary school and the MET charter school, and the redesign of a half vacant shopping mall into the RK Center that serves as the North End’s commercial hub today. Nevertheless, much remains to be done. The Newport Open Space Master Plan conducted back in 2017 discovered that although the city has a large number of parks and open spaces, most of them are located in the south part of the city whereas most of the school age children requiring playgrounds and open spaces are located in the North End. It was also determined that unlike the majority of Newport, the North End is largely disconnected from the waterfront.

With both the “Bridge Realignment” and the concept design for the development of the former Newport Casino in the works, the city council became aware that the city zoning and comprehensive plans for the area were not properly coordinated with one another. To address the situation, the Newport City Council passed a six-month moratorium on new planning approvals for the area effective October 10, 2019. This moratorium is scheduled to expire on April 8, 2020 and is serving as a strong motivation to conduct the planning work and new design guidelines as quickly as possible.

To this purpose the City Council issued a request for Proposals from planning firms from around the nation to undertake a planning study and make recommendations to the city within the six month window. From eight proposals received, the city staff and council selected a team lead by NBBJ, a planning and architecture firm found in Seattle but now with offices across the United States including Boston. As part of the effort the team has been meeting with business owners, community groups and other stakeholders with a strong interest in the future development and design of the North End. A community charrette organized on February 25th at the MET school had over 150 participants and was used to gather information from the residents of the city with regard to what the priorities of the plan should be. At that session the planning group unveiled what it thought the 5 main goals for the project should be: “Opportunity, Community, Resiliency, Equity, and Quality.” A copy of the presentation and other planning related information is available online at https://courbanize.com/projects/northend/information.

Soon after the February community meeting the effects of COVID-19 pandemic shut down the possibility of in person meetings and many workers including the design team were sequestered under “stay at home” orders. Now, as the economy is slowly re-opening, the NBBJ group is reaching out to groups that they feel may have useful information and perspectives including the Newport Architectural Forum group founded in 2007. This group of architects, planners, designers, landscape and interior designers, and supporters of those various arts are invited to participate on a Zoom call with the design team. Although we may all be locked down, the pandemic will pass but the decisions we make now about the future of the North End will be with us for the rest of our lifetimes and most probably for generations to follow. It is well worth our time and effort to contribute as much as we can to the process so that the outcome is as good as it can be.

Ross Sinclair Cann, AIA, LEED AP, is an historian, educator, and practicing architect at A4 Architecture who lives and works in Newport, Rhode Island. He is the founding Chairman of the Newport Architectural Forum and a member of the Newport Open Space Planning Initiative.